ORDINARY PEOPLE (Paramount Presents #30): Even Better Than "Friday the 13th" 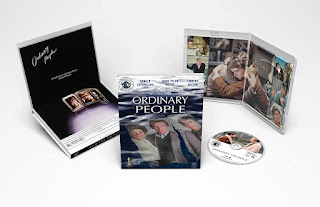 I remember seeing this in a theater, the Southgate Quad, which was just a short bike ride from where I grew up. Not that it was specifically the movie I pedaled into downtown Milwaukie to see - hey, I was 15 - but I often spent my Saturdays there to do a little theater-hopping. Ordinary People, re-released to capitalize on all the Oscar nominations it had just received, simply happened to be one of the movies playing that weekend, so why not?

Of all the movies I snuck into that day - one of them might have been Friday the 13th - Ordinary People left the greatest impression, which surprised me. A dead serious, downbeat movie about a well-to-do family trying to come to grips with the death of one son and a suicide attempt by the other? Not quite as rousing as watching Mommy Voorhees get her head lopped off, but damn, these characters felt real. Watching them spiral apart before our eyes wasn’t exactly a fun time at the movies, but far more tension filled than the untimely deaths of a gaggle of teenagers.

The film was also something of a revelation. Here was none other than Mary Tyler Moore - America’s sweetheart at the time - as Beth Jarrett, the self-absorbed, aloof and ultimately cruel matriarch who not-only shuns her one surviving son, Conrad (Timothy Hutton), throughout the film, her actions during the final act downright abhorrent. Most shocking of all, Moore absolutely nails it.

Additionally, Ordinary People was Robert Redford’s directorial debut. Even after spending most of the ‘70s downplaying his on-screen dreaminess - mostly succeeding - one still might assume the guy’s first foray behind the camera would be some kind of “look-at-me” vanity project. Instead, he’s in service of the story and characters, while displaying an uncanny knack for tone and pacing.

Ordinary People probably didn’t deserve to win Best Picture over Raging Bull that year, but it was the only nominated movie I’d actually seen by the time the Oscars rolled around, so naturally I rooted for it. Moore was robbed, of course, but at least Hutton won for Best Supporting Actor (though Conrad is arguably the main character). Even more than Kevin Bacon being speared through the neck in Friday the 13th, his portrayal was yet-another revelation. Though Hutton’s subsequent career ultimately never lived up to the promise of that performance, you’d be hard-pressed to come up with a more realistic depiction of an angst-ridden suburban teenager, even today.

Speaking of which, Ordinary People still holds up well, with themes that are as timely now as they were four decades ago. Considering the increasing awareness of such issues as depression, anxiety and suicide over the years, perhaps even more so. A true classic, the film is a terrific addition to the ongoing Paramount Presents series, as well as collectors’ shelves.

SWIMMING IN THE ROSE GARDEN - New interview with Timothy Hutton.