BRYAN LOVES YOU...Even If You Might Not Love Him Back 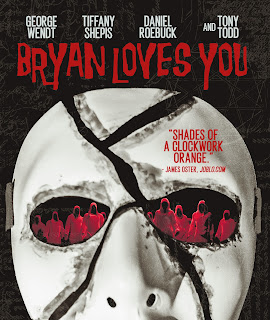 Originally released 14 years ago, Bryan Loves You isn’t a cult classic, nor is it some kind of lost treasure awaiting rediscovery. By 2008, “found footage” had mostly worn out its welcome and this film didn’t add much to an already overcrowded subgenre. On top of all that, writer-director-star Seth Landau isn’t a particularly engaging actor. Still, Landau surrounds himself with a talented cast of familiar faces - even if most of their roles are essentially cameos - and some elements of the story are pretty unnerving.

That story gets off to a shaky start, though, with psychotherapist Jonathan (Landau) investigating weird doings in the small town where he lives, which is under the control of a bizarre cult. His motivation for documenting everything with a video camera is hazy, and if the cult’s influence is already this widespread, one would think a psychotherapist would have noticed by now (especially since the townspeople’s behavior is so overtly bizarre).

But once he’s “committed” to a psychiatric hospital, the story takes a dark and compelling turn. The so-called hospital is actually the cult’s headquarters where they indoctrinate new members…generally against their will. We get the impression that the psychological torment Jonathan is subjected to is similar to real life cult practices (even if Landau isn't a particularly convincing victim).

Had the rest of the film been as harrowing as its middle act, Bryan Loves You could’ve been a nifty little piece of psychological horror. Instead, it descends into a ridiculous chase that reeks of amateurism and culminates with an abrupt, disappointing conclusion.

However, this disc still might be worth checking out for the bonus features. Even if Bryan Loves You ends up being underwhelming, Landau is extraordinarily likable and his enthusiasm is infectious, as shown in four lengthy, highly entertaining Zoom interviews with some of his cast. I especially enjoyed the interview with familiar character actor Daniel Roebuck, which turns into an fun conversation between a couple of movie nerds. In the end, this is another case where the stories behind a film are more interesting than the film itself.