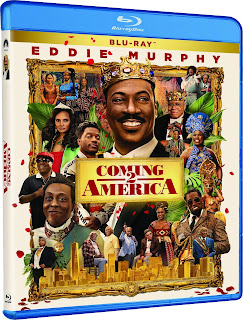 As completely unnecessary sequels go, I’ve seen worse than Coming 2 America. Perhaps that’s because my expectations weren’t all that lofty to begin with.

I don’t share the same love for the original Coming to America that many do. It’s not terrible by any means, just somewhat overpraised (like most films directed by John Landis). As for Murphy…he never topped his brash, star-making performance in 48hrs, and with the surprising exception of Dolemite is My Name, it’s been at least 20 years since he’s appeared in anything funny.

That being said, many who consider the first film Murphy’s masterpiece will probably enjoy this one, especially since it could almost be considered a remake. Coming 2 America often revisits the same gags and (sometimes awkwardly) throws in every secondary character who endeared themselves to audiences the first time around, no matter how inconsequential to the story.

Speaking of which, the plot is pretty similar, too. Akeem (Murphy) is now king of Zamunda, with American wife Lisa (Sari Headley) and their daughters. However, he needs a male to inherit the throne, so when Semmi (Arsenio Hall) informs him of an illegitimate son he fathered in Queens 30 years ago, he goes to America to find and bring him back. Meanwhile, General Izzi (Wesley Snipes) from neighboring Nexdoria demands that their two countries unite through an arranged marriage between his daughter and Akeem’s son.

However, the son, Levelle (Jermaine Fowler), isn’t so sure he's ready for royalty, or to marry someone he doesn't know, especially after falling for Akeem’s royal groomer. Predictably, Levelle defies Akeem much like he did 30 years earlier. Blatantly contrived to evoke nostalgia, the narrative is loaded with shout-outs, flashbacks and plot turns identical to the original film. Some of it is funny, some of it is stale, some of it is dumb and gratuitous, such as several pointless musical cameos by various artists.

Still, the performances are decent. Murphy and Hall once-again play multiple roles; the former is up to the task, the latter was never funny to begin with. As Levelle, Fowler is earnest and likable. Snipes and Leslie Jones (playing Levelle’s brash mother) are fun, while Headley isn’t given much to do but look befuddled. In fact, many of the returning characters serve no real purpose other than providing warm fuzzies for the audience.

But I get it. When it comes to (very) belated sequels, familiarity is always the safest path. While that approach does render much of Coming 2 America somewhat redundant, one could look at it like being told a good joke you've heard before…not as fresh or funny the second time around, but it can still put a smile on your face.

FROM QUEENS TO ZAMUNDA - A fairly enjoyable 25-minute featurette consisting of interviews with cast & crew. Some location footage.