MONSTER FROM GREEN HELL and the Last Laugh 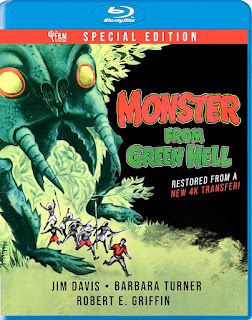 Cheap even by ‘50s B-movie standards, Monster from Green Hell nevertheless has its moments. Granted, most of those moments are unintentionally humorous, but considering the film was moderately successful at the box office*, it was obviously producer Al Zimbalist who had the last laugh.

Jim Davis plays Dr. Quent Brady, your standard-issue scientist whose experiments go horribly awry. In this case, he launches rockets into space with critters on-board. The one carrying wasps crashes in a deep part of Africa known as Green Hell. Now the bugs are irradiated, gigantic and pissed off. So Brady and loyal assistant Dan Morgan (Robert Griffin) lead a safari hundreds of miles into the region - on foot - to deal with them. Along the way, they confront heat, drought, snakes, stock footage and, of course, the occasional venomous winged behemoth (though they have apparently forgotten how to fly).

The wasps in action are highly amusing, especially since they vary wildly in size from scene to scene, but we do have to endure an unhealthy amount of down time between bug battles. Padding out the rest of the film to (barely) achieve feature length, the scientists' arduous journey - punctuated by frequent smoke breaks - comprises the bulk of the running time. After all, a bunch o’ guys trekking across the Southern California African plains is a lot cheaper to shoot than enormous insects.

What else would you expect from the same guy who gave us Robot Monster? While Monster from Green Hell doesn’t quite reach the same campy heights (or depths), there are enough shits & giggles for lovers of fine aged cheese. In addition to a nice restoration, this Blu-ray includes a few entertaining bonus features, some of which suggest producer Al Zimbalist once enjoyed a few chuckles himself...at our expense.

*According to the essay, “The Men Behind the Monsters,” which is included with this disc.

SUPPLEMENTAL BOOKLET - Includes an fascinating - and sometimes amusing - essay, “The Men Behind the Monsters,”  by Don Stradley.