AN AMERICAN WEREWOLF IN LONDON Has Extra Bite in 4K 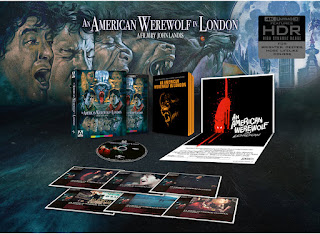 If aesthetics and physical bells & whistles are your thing, it’s hard to top this brand new 4K limited edition of An American Werewolf in London. Arrow Video had already given the film a pretty impressive Blu-ray facelift three years ago, but this 4K disc looks a little better, with less grain, deeper color and an overall sharper image. Still, depending on your set-up, the difference may be negligible, which could also be said for the audio, although this version does include the original 1.0 mono track.

But the real joy of this set are the extra goodies. While all of the bonus features and commentaries are identical to the 2019 Blu-ray release, this one includes a lot of the same physical perks that have made Arrow’s Limited Edition boxed sets so much fun (and worth the exuberant price tag for die-hard fans).

As for the film itself, An American Werewolf in London has aged remarkably well from a technical standpoint, better than most other horror movies released in the 1980s. The spectacular werewolf transformation sequence halfway through remains a make-up effects milestone, forever changing the way creature features would be made. As practical effects go, only John Carpenter’s The Thing ever topped it. More importantly, they are still convincing. That alone makes An American Werewolf in London deserving of a spot on any horror lover’s shelf.

However, I’ve always been of the (minority) opinion that the groundbreaking imagery tends to overshadow the film’s shortcomings, such as a protagonist who’s pretty-much devoid of any real personality, a fairly standard plot and a maddeningly abrupt conclusion that suggests writer-director John Landis couldn’t figure out how to end it. Maybe that's because he’s always been a better director than a screenwriter, with a distracting penchant for personal in-jokes, self-conscious quirkiness and gratuitous sex (though admittedly, many fans look at those as virtues). Comparatively speaking, Joe Dante’s The Howling, released around the same time, was a more creative – and funnier – homage to werewolf lore.

But that’s just me…perhaps being a bit blasphemous. To an overwhelming majority of horror lovers, An American Werewolf in London remains one of the sacred cows of the ‘80s. For them, this Limited Edition set is indispensable, as it contains enough upgrades and content to make your TV screen, shelf and walls look just a little bit cooler.

“MARK OF THE BEAST: THE LEGACY OF THE UNIVERSAL WEREWOLF” - Easily the best of the bonus features, this 77 minute retrospective documentary on the history of Universal monsters (not just werewolves) is a must-see. Includes numerous interviews Landis & Naughton, as well as directors Joe Dante, Daniel Griffith and a host of others.

“AN AMERICAN FILMMAKER IN LONDON” - An entertaining interview with Landis, though it sometimes covers the same ground as the above-mentioned doc.

“WARES OF THE WOLF” - A short look at some of the props and masks.

"BEWARE THE MOON” - Vintage documentary, running 97 minutes, that covers quite a bit of the same ground as “Mark of the Beast.”

GALLERIES – Stills, promotional material, storyboards and even the shooting schedule.

58-PAGE BOOK - Essay, “Sick as a Dog: Body Horror in An American Werewolf in London,” by Craig Ian Mann; Essay, “One Full Moon, Two Young Stars,” by Simon Ward; “An American Werewolf in London: Can Rick Baker and John Landis Top The Howling?” (an article from Cinemafantastique, first published in 1981); collection of 3 reviews from 1981; cast, crew & restoration credits.

TWO–SIDED POSTER - Featuring artwork from the 2019 Arrow Blu-ray release, as well as a vintage minimalist design I’ve never seen before.