A Second Look at THE MATRIX RESURRECTIONS (4K) 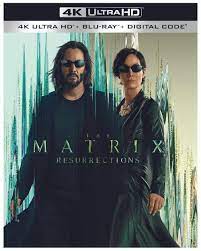 When my wife and I saw the first trailer for The Matrix Resurrections, we got goosebumps. It really is stunning, especially with an orchestrated interpretation of “White Rabbit” juxtaposing the promised spectacle. Sure, the second two films in the original trilogy were convoluted, disappointing and didn’t leave the door open for a fourth film, but maybe Lana Wachowski would return her franchise to the narrative simplicity of the first film.

Due to our ongoing boycott of Regal Cinemas and their stupid reserved seat policy, we ultimately ended up watching it on HBO Max. That turned out to be a good thing because, aside from losing some of its visual impact in our living room, the film was…well, underwhelming. As technically groundbreaking as the original was, two decades have passed since then and ”bullet time” is now just another overused FX tool.

That leaves the characters and story. It was great seeing Neo and Trinity again (Keanu Reeves and Carrie-Annie Moss slip comfortably back into their roles), but Hugo Weaving and Laurence Fishburne were sorely missed, even though their characters remained integral to the story. Speaking of which, Wachowski and her co-writers seemed hell-bent on making the narrative even more complex and baffling than The Matrix Reloaded (with no jaw-dropping freeway chase halfway through to give our brains a breather). Two-and-a-half hours later, my wife and I were glad we didn’t pay to catch it in a theater.

So when reviewing this disc, my original plan was to simply check out the technical specs - the film looks and sounds phenomenal in 4K - and supplemental material, rather than sit through the whole thing again. As for the bonus features…not only are they substantial, they ultimately compelled me to watch the film again. For example, I was surprised to learn how much of the action and fight sequences were done in-camera, including a scene where Neo & Trinity leap from the roof of a 50 story building…a stunt which Reeves and Moss did themselves! Surely all that stuntwork deserved a second look.

I enjoyed the film this time around. The action and special effects may no longer be cutting-edge, but they’re still impeccably crafted without bombarding viewers with CGI overkill (which ultimately sank The Matrix Revolutions). I also appreciated the meta aspects of the narrative more than before, such as the assertion that the original trilogy is actually a video game created by Thomas Anderson (Reeves) while still in the Matrix. And while I initially viewed one character’s mention of Warner Brothers as another silly shout-out to itself (its second of 2021 following Space Jam 2), learning of Wachowski’s past-feelings over revisiting the franchise renders the scene pretty clever. In fact, when viewed as more of a self-aware spin-off than a canonical sequel, The Matrix Resurrections ain’t bad at all.

The story still gets bogged down by an infatuation with its highfalutin complexities and dialogue, but as superfluous sequels go, The Matrix Resurrections is pretty enjoyable (and throws in Neal Patrick Harris for good measure). While nothing about it will wow audiences like The Matrix once did, it's arguably better than the other sequels. It just might take more than one watch to realize that.

NO ONE CAN BE TOLD WHAT THE MATRIX IS - Various cast members take turns recapping the original Matrix trilogy. Kind of fun.

RESURRECTING THE MATRIX - A 30-minute doc about how the fourth film came about. Of unique interest is when Lana Wachowski discusses overcoming personal problems and tragedies.

THE MATRIX REACTIONS - 9 additional featurettes with a ‘play all’ option. They’re all worth checking out, especially the jaw-dropping “San Fran Jump” segment.