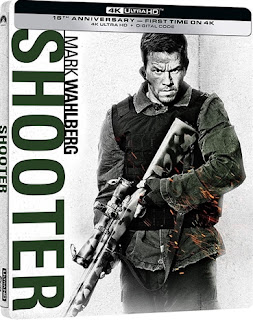 Shooter works because…well, it’s supposed to. If certain films can be looked at as comfort food, this one is definitely a heaping helping of meatloaf and mashed potatoes.

Despite the occasional award nomination here and there, Mark Wahlberg will never be mistaken for a master thespian. However, he brings an earnestness to his performances that I’ve always found agreeable. Arguably unable to completely disappear into a character, he does have a knack of picking projects conducive to his biggest strength, which is essentially being Mark Wahlberg.

And if there’s a genre that suits his abilities best, it’s the action film, where he’s always been reliable.

Similarly, director Antoine Fuqua may not be a household name, but has a solid track record: Training Day, The Replacement Killers, The Magnificent Seven, Olympus Has Fallen and two Equalizer films, to name a few. The guy knows his way around an action film and is pretty adept at giving his characters enough breathing room for the audience to invest in them.

While Shooter ain’t the best or worst in either man’s resume, it remains a predictably solid action boom-fest that meets viewer expectations without ever exceeding them. Engaging and tons of fun in the moment, the film is just forgettable enough that it’ll feel brand new when revisited a year or two later. Such is the case with a lot of Wahlberg’s movies, actually.

For the record, this is the one with Wahlberg as Bob Lee Swagger, an ex-Marine sniper who never got over the death of his spotter during a botched mission. He’s recruited by Colonel Johnson (Danny Glover) to plan a potential Presidential assassination scenario in anticipation of an actual threat. However, he’s set-up to take the fall when a real assassination occurs, killing the visiting Ethiopian Archbishop. Now Swagger is on the run, a national fugitive with only rookie FBI agent Nick Memphis (Michael Pena) and his dead spotter’s wife, Kate (Sarah Fenn), convinced of his innocence.

Shooter contains no real surprises or plot twists. Even the “shocking” double-cross is clumsily telegraphed way in advance by the behavior of Johnson’s right hand man, Jack (Elias Koteas). But no one watches these things for actual intrigue (or plausibility). Despite late-inning efforts to spice things up with shady senators and greed-driven cover-ups, this is the Mark Wahlberg show. Watching him shoot people, blow shit up and dress his own wounds is highly enjoyable, especially once the always-reliable Pena (the closest thing to comic relief) joins him.

Again, Shooter is one of those dishes we know will be enjoyable before we’re even seated at the table. It contains all the necessary ingredients for a satisfying meal, cooked-up by chefs who know the recipe well enough not to try anything fancy. And if the film itself is comfort food, this 4K transfer can be considered the gravy, making an already decent film taste even better. Nicely garnished in a collectible SteelBook, lovers of things that go ‘boom!’ will have no complaints.

FEATURETTES - “Survival of the Fittest: The Making of Shooter”; “Independence Hall” (a feature on one of the key locations).