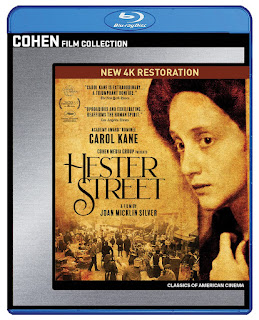 There’s a big list of lesser-known character actors who, for one reason or another (and sometimes no reason), I have always found interesting. One such guy was Steven Keats, who appeared in a handful of movies from the ‘70s that I admire very much, such as Black Sunday, Death Wish, The Friends of Eddie Coyle…even the lowbrow car chase comedy, The Gumball Rally (a childhood favorite).

Sadly, Keats passed away in 1994 at the age of 49 (from an apparent suicide). But even today, whenever he pops up as a guest star in an old TV rerun - which he did a lot of in his later career - I perk up a little. There’s just something about the guy’s screen presence that has always intrigued me.

While Hester Street is mostly remembered for Carol Kane’s Oscar-nominated performance, it’s also the only film to feature Keats in a leading role, that of Jake, a philandering Jewish immigrant who has enthusiastically assimilated himself into American culture during the three years he’s lived there. Though he has a decent job, Jake not-only takes-in co-worker Bernstein (Mel Howard) as a boarder, he borrows money from mistress Mamie (Dorrie Kavannaugh) to furnish his tiny apartment.

Jake’s also kind of a self-absorbed bastard, as revealed when he grudgingly arranges for wife Gitl (Kane) and young son Yossele to join him from Russia (which, of course, doesn’t sit well with Mamie). He treats Gitl coldly, is verbally abusive and overtly resentful at her reluctance to be more “American.” During the course of 90 minutes, Jake goes from outwardly charming to someone we despise, and Keats absolutely nails it. It’s a shame this role didn’t lead to bigger things.

Still, Hester Street is ultimately Gitl’s story. She confides and seeks advice from Bernstein and outspoken neighbor, Mrs. Kavarsky (Doris Roberts), coming out of her shell and arguably becoming more independent than Jake. Kane gives a remarkable performance, conveying (by turns) helplessness, uncertainty, pride in her heritage and quiet resolve. And despite what she's forced to endure at her husband’s hands, it’s ultimately a charming, lighthearted story that also serves as a snapshot of Jewish immigrant culture during the turn of the last century.

Considering the low budget, the authentic production design is pretty remarkable and given an atmospheric boost by writer-director Joan Micklin Silver's decision to shoot the film in black and white. Speaking of how it looks, Hester Street has been nicely restored for this Blu-ray release, which also includes several interesting bonus features related to the production. But most importantly, here’s everyone’s chance to appreciate the late Steven Keats’ unheralded career as much as I do.