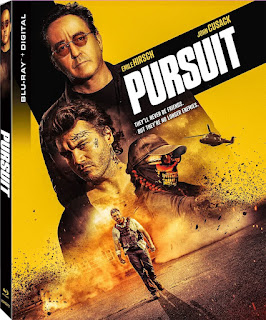 Sorry, I just don’t buy Emile Hirsch as an action hero (or in this case, antihero). His face and mannerisms remind me too much of a young Jack Black to take him seriously, no matter how many badass tattoos they stick on his face. Likewise, co-star Jake Manley is practically Ethan Hawke’s Mini-Me and doesn’t even look old enough to buy a beer, let-alone bust drug dealers.

Then there’s the one & only John Cusack, the spitting image of a guy who used to be on Hollywood’s A-list, but has since joined Bruce Willis and John Travolta in the Brotherhood of the Budget Bin. Like his shameless brethren, Cusack lends his name and a few days’ work to Pursuit in exchange for a paycheck and prominent billing.

The plot of this one is all over the place, as if its three screenwriters were given a basic synopsis, then retreated to separate rooms to bang out their drafts. In a nutshell, slacker hacker Rick Calloway (Hirsch) searches for his missing wife while shooting drug dealers before hotshot cop Mike Breslin (Manley) has a chance to bust them. Rick is caught, but while in custody, he hacks into Mike’s home computer and discovers the cop’s wife was recently murdered. How he manages to do this while in jail is never explained, one of many glaring lapses in plausibility we’re expected to swallow.

Anyway, Rick’s trail of bodies has earned the wrath of a southern druglord, who also happens to be partners with Rick’s dad, John (Cusack). So Rick offers to tell Mike who killed his wife in exchange for being safely escorted down to Arkansas (where he suspects his wife is being held). Why Mike would ever agree to such a deal is never reasonably explained, either, but once the two get down south, Rick escapes custody. Now everyone is looking for Rick, either to save him, arrest him or kill him. There’s a slew of other inconsequential characters, side stories and plot turns to further muddy the waters, exacerbated by convoluted expositional dialogue. Maybe it all made sense on paper, but what’s up on screen is often baffling.

On the plus side, Pursuit seldom stops to take a breath, practically sprinting from one bloody conflict to the next. Dismissing such trifles as plausibility and coherence leaves plenty o’ room for gunfights, torture, explosions, premature burials and the occasional grenade in the nether regions. For a low budget film, the action and brutal violence are deftly handled, which could appease those willing to forget about following the story.

Still, Pursuit is mostly a slap-dash debacle with cardboard characters, an overstuffed story and two woefully miscast lead actors. Cusack himself - perhaps aware his character is mostly irrelevant - collects another paycheck with minimal effort. Undemanding action fans might be mildly amused; others will find the whole thing a waste of good sofa time.

BEHIND THE SCENES OF PURSUIT - Making-of featurette