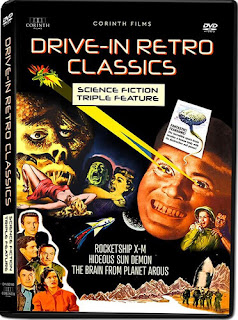 This trio of sci-fi quickies would probably have been lost forever if not for the efforts of Wade Williams, a lifelong film fan who spent a good portion of his career buying the rights to forgotten old B-movies (just in time to take advantage of the '80s home video boom). While none are classics, a couple have since earned a cult following and might even be of minor historical importance to the genre.

1950’s Rocketship X-M is noteworthy for being one of the first films to attempt a realistic depiction of space travel. Quickly - and cheaply - produced to beat Destination Moon into theaters, the plot features a crew of five shooting for the moon but accidentally ending up on Mars. Inevitably, some of the science is humorously dated - as are the constant reminders that the lone female crew member is “just a woman” - but the film is more grounded in reality than most ‘50s-era sci-fi and comes to a surprisingly downbeat conclusion, which was atypical of the genre at the time. Also noteworthy is the cast, featuring a handful of familiar faces, including Lloyd Bridges, Hugh O’Brian and Noah Beery, Jr.

Fans of the ‘80s cult classic, The Hidden, might find some remarkable similarities in The Brain from Planet Arous, released almost 30 years earlier. In this one, a disembodied alien brain named Gor possesses the body of nuclear scientist Steve March (John Agar) with the intent of ruling the world through intimidation…while also engaging in a bit of Earthly canoodling with March’s girlfriend. Meanwhile, the more benevolent Vol embodies March’s dog (!), mostly to advise them how to defeat Gor. For a drive-in cheapy, the film has some amusing moments, sometimes at its own expense - the final brain battle is a hoot - but also because Agar engages in some prime scenery chewing.

The Hideous Sun Demon is the worst of the lot. Sort of a backwards werewolf story, the plot has yet-another scientist (Robert Clarke) exposed to radiation which transforms him into a scaly, murderous monster whenever he’s exposed to the sun. The performances, dialogue and creature effects are uniformly terrible, which might’ve been good for a few shits & giggles if not for the fact that the film is absurdly padded out to feature length by interminable stretches of our “hero” getting frisky with a gangster’s girlfriend. Amateurishly made, it also sounds like the whole thing was shot using a single on-set microphone.

The picture quality varies from film to film. Rocketship X-M sports a pretty clean image, while the other two feature brief segments that the ravages of time must have rendered irreparable. But hey, it ain’t like anyone’s pining for 4K editions of these titles. For the most part, they look and sound pretty good for their age. These films may not be "classics," but they're certainly retro.