TO SLEEP SO AS TO DREAM: A Love Letter to a Bygone Era 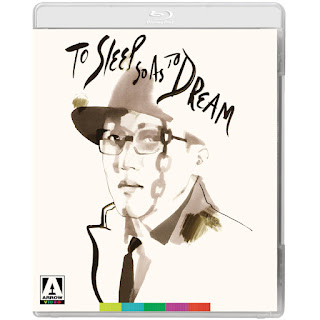 I feel like I’ve been missing out on something. Even though it’s almost 40 years old, I've never heard of this film or the director. If it is indicative of Kaizo Hayashi’s other work, I’ll have to check some of them out because To Sleep So as to Dream is unlike anything I’ve seen in a long time.

On the surface, there’s a fairly standard plot. Egg-obsessed Uotsuka (Shiro Sano) is a down-on-his luck private detective hired by aging silent film actress Madame Cherryblossom (Fujiko Fukamizu) to bring back her daughter, Bellflower, who’s being held for ransom. However, the mysterious kidnappers toy with Uotsuka - and his eager young partner, Kobayashi (Koji Otake) - by leading him all over town with cryptic riddles and clues to her location. But each time he solves the puzzle, the kidnappers raise the ransom and send him on another chase.

However, To Sleep So as to Dream is not a cat & mouse thriller, nor does it remotely play like one. In fact, the film is more of a cinematic love letter to a bygone era of Japanese cinema…more specifically, the silent films of the ‘20s that were often presented with live narration by “benshi,” actors who provided exposition for the audience. With the exception of sound effects, recorded voices and a hauntingly beautiful score, the film is silent. And though the story appears to take place in the 1950s, it’s shot in black & white in the same aspect ratio as movies from the silent era.

Most intriguingly, the narrative effectively blurs the line between the celluloid world and the real one, growing increasingly surreal as it unfolds. However, the film never descends into arty ambiguity for its own sake. The dreamlike sequences and imagery are not only aesthetically arresting, they are essential to the emotional payoff during the final act, which is almost poetically beautiful.

Artistic without being pretentious, To Sleep So as to Dream is one of those wonderful little obscurities just waiting to be discovered by a new audience. Picturesque, charming and languidly paced - in a good way - the film is almost Kafkaesque in tone, yet never plunges to similar oppressive depths. In fact, the denouement might touch the heartstrings of many cinephiles.

HOW MANY EGGS? ACTOR SHIRO SANO TALKS - Interview with actor Shiro Sano, who discusses his work with director Kaizo Hayashi (this was the first feature film for both of them).

TALKING SILENTS: BENSHI MIDORI SAWATO TALKS - The “benshi” artist discusses the history of the artform in Japanese silent cinema. You should watch this before checking out the next bonus feature…

MIDORI SAWATO PERFORMS “THE ETERNAL MYSTERY” - Sawato does a “benshi” performance of the film-within-the-film.

SUPPLEMENTAL BOOKLET - Essay, “To Film So as to Sleep,” by Asain film expert/author Aaron Gerow; “The Miracle of To Sleep So as to Dream” (statement by director Kaizo Hayashi); director filmography; cast, crew & restoration credits.