THE BOY BEHIND THE DOOR Takes Us on a Dark Ride 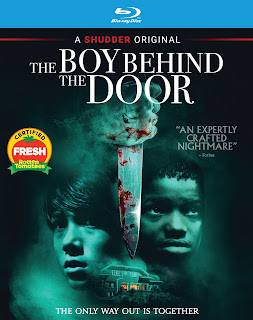 Despite some narrative implausibilities, The Boy Behind the Door is a tightly-paced, nerve-jangling little thriller. It builds its tension on a disturbing premise, which keeps the viewer on-edge because the protagonists in peril happen to be children.

Specifically, Bobby (Lonnie Chavis) and Kevin (Ezra Dewey) are pre-teen boys who've been abducted and thrown into a car trunk by an unseen assailant. Kevin is then taken into a large house in the country, while Bobby remains bound and locked in the car. However, he manages to get out, and is just about to run away when he hears his friend screaming. So instead, he sneaks into the house to try and rescue him.

Meanwhile, a man (billed as The Creep and played by Micah Hauptman) arrives and hands a wad of bills to the kidnapper, who in-turn leaves the house so the man can have his way with Kevin. With the clock ticking - The Creep is allotted 90 minutes to do…whatever - Bobby must now find his friend while trying to avoid being seen, all before the kidnapper returns. A tense confrontation ends with Bobby accidentally killing The Creep. Worse yet, the kidnapper returns before he and Kevin are able to escape, leading to a claustrophobic, unnerving game of cat & mouse within the house.

Revealing the kidnapper would spoil one of the film’s surprises, but as antagonists go, this one oozes menace and lacks anything resembling empathy. Conversely, we’re immediately invested in Bobby & Kevin even though we learn little about them. The terror they’re forced to endure, though tastefully depicted, is almost relentless and sometimes jarringly violent. Neither kid is completely helpless - Bobby, in particular, thinks quick on his feet - but their very survival occasionally depends on sheer luck.

Though there are a few lapses in credibility and logic, The Boy Behind the Door compensates with convincing performances (especially Kristin Bauer van Straten) and smart, economical direction. Writer-directors David Charbonier & Justin Powell’s minimalist approach to dialogue and exposition not-only respects the audience’s intelligence, it exacerbates the tension. Dark but never brooding, this is an intense thriller well worth checking out.

MUSIC VIDEO - Plays more like a trailer without dialogue or a voiceover.