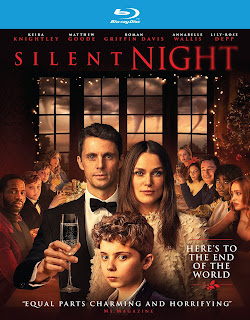 I’ve seen a few movies where it’s almost immediately established that the entire human race is doomed, with zero chance of survival. The bleakest one I’ve ever seen was a little known Australian film called These Final Hours, and if you’re ever in the mood for a superlative piece of downer cinema, I highly recommend it.

But human extinction can be funny too, some great examples being Dr. Strangelove and, most recently, Don’t Look Up. Like those films, Silent Night tries to infuse a timely message into its black comedy. In this case, it’s humankind’s carelessness with the environment, along with a bit of fleeting commentary on class inequity. However, the film is seldom very funny, nor are its themes particularly enlightening.

The story has a group of lifelong friends, along with their families & partners, gathering for one last Christmas dinner before being engulfed by a toxic cloud spreading across the Earth. The British government has issued euthanasia pills to all its citizens - excluding immigrants and the homeless - which most of the characters plan to take later that evening. A majority of the story takes place within the confines of the house.

But despite an interesting premise and talented cast, Silent Night is sort of an endurance test. Not only does it feel longer than it really is, most stabs at black comedy consist of these characters being petty, judgmental, condescending and sometimes downright cruel to each other. These are friends? And because everyone is mostly unlikable - including the kids - we’re generally indifferent to their fates, even as the end draws near and a few of them finally begin to display some humanity.

It’s too little, too late, though. Silent Night subjects the audience to 75 minutes of interminable squabbling, then expects us to play along as it shifts tonal gears for the somber climax…a tall order when we don’t give a damn about any of the characters. Perhaps if first-time director Camille Griffin spent more time showing how these people come-to-grips with the end of the world - comically or otherwise - we’d have some sympathy for them.