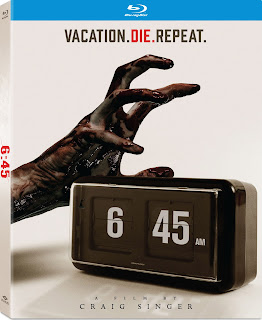 Bobby (Michael Reed) and Jules (Augie Duke) decide to spend a weekend in Bog Side, the small coastal town where he grew up. Though the audience isn’t given any initial details, the couple has recently hit some rough spots, which Bobby appears determined to atone for.

On their first full day, they wake up at 6:45 in a bed & breakfast run by Gene (Armen Garo), sort of an odd duck who seems friendly enough (though there’s certainly something “off” about him). The couple spends the day walking the streets, visiting shops and dining…at least until a dark, largely-unseen figure approaches them on the sidewalk, slashes Jules’ throat and snaps Bobby’s neck.

Suddenly, it’s 6:45 again on the same day, but only Bobby is aware of it. They visit the same shops and dine in the same bar before being killed again, only in a different location. The day is repeated over and over, and no matter what Bobby does to prevent it, it always ends with their deaths. However, we also learn more about Bobby and the reasons for the couple’s relationship problems, which becomes increasingly central to the narrative.

For a while, 6:45 is pretty engaging. We’ve seen the Groundhog Day concept used in horror before, but director Craig Singer does a nice job creating a haunting atmosphere; there’s something creepy about this sparsely populated town right from the get go. And the first few time loops are certainly intriguing, dropping subtle bits of foreshadowing to increase the tension.

But we’re eventually provided too much foreshadowing. By the halfway mark, the film has revealed enough about its protagonist that we’re pretty sure of the twist ending that awaits. This results in an unnecessarily protracted final act that’s ultimately underwhelming, despite Singer’s creatively-assembled montage of flashbacks revealing what really happened with this couple. Had we known less about them beforehand, the denouement would have been a lot more shocking.

Still, other aspects of 6:45 are enough to make it worth viewing. The foreboding tone and well-timed moments of bloody violence (including a really disturbing post-mortem scene during the climax) certainly befit the horror aspects of the story, even if the film itself is ultimately more of a psychological thriller.