NOSFERATU IN VENICE: Come for Klaus, Stay for His Story 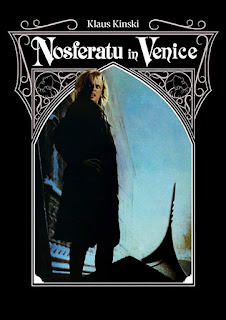 Back in the day, I went to a W.A.S.P. concert with a few friends. The opening act was a little band called Metallica, who none of us ever heard of. Loud, fresh and unbelievably fast, they pretty-much blew W.A.S.P. off the stage that night. When their set was done, we briefly considered cutting-out early because, 1) No way was any band gonna top that, and 2) Our weed was in the car. But since W.A.S.P. was the band we actually paid to see, we decided to stick it out, though their show was anticlimactic.

This disc is kind of like that concert. Nosferatu in Venice - an unofficial sequel to Werner Herzog’s classic - may be featured on the cover, but it’s the accompanying feature-length documentary, pretty-much the sole bonus feature, that makes it worth picking up.

For cultists, classic film lovers and B-movie aficionados alike, Klaus Kinksi needs no introduction. Sure, he was Herzog’s muse, being both brilliant and bombastic, but saying he was difficult to work with is an understatement. Toward the end of his long career, his behind-the-scenes behavior became the stuff of legend...tormenting directors, sexually harassing female co-stars, refusing to perform, often to the point where he negatively impacted how these films turned out.

“Creation is Violent” chronicles those years, as told by the directors, producers and co-stars - including former girlfriend Debora Caprioglio - who endured him. Some have grudging respect, while others make their contempt pretty apparent, but all of them offer fascinating anecdotes about the difficulty of working with him. Nosferatu in Venice appeared to be the pinnacle of his belligerent behavior and that film’s tumultuous shoot - entirely Kinski’s doing - is discussed at-length. When all is said and done, it’s a minor miracle the film got made at all.

I highly recommend checking-out the doc first, sort-of like an opening act. Sordidly compelling and far more entertaining, it tends to render Nosferatu in Venice anticlimactic, but also provides valuable context for the cinematic trainwreck you’re about to see.

A sequel to Herzog’s Nosferatu in-name-only, Kinski returns as everyone’s favorite bug-eyed, boob-squeezin’ bloodsucker, making his way to Italy after being summoned awake from a 200 year slumber. Christopher Plummer is on-hand as vampire hunter Paris Catalano, while Donald Pleasence plays a histrionic priest similar to his role in Prince of Darkness. Most of the female cast stands at-the-ready to get naked and be groped by Kinski, who naturally buries himself in the part (and their necks...and their nether regions).

While the film has a few decent death scenes, it’s narratively disjointed, clumsily executed and laughably pretentious. At its center is the man himself...over-emoting and gobbling scenery like a ravenous dog. There’s a lot of fun to be had at the film’s expense, especially by watching the documentary first. Knowing Kinski bears most of the blame for turning Nosferatu in Venice into a dumpster fire - he allegedly directed a few scenes himself - really ups its entertainment value.

So this might be the first time I’ve recommended a disc for the supplemental material alone. “Creation is Violent” would be worth a purchase all by itself, as it’s a fitting coda to an eccentric actor’s wild career. Not only does it enhance the experience of watching Nosferatu in Venice, I’d argue that most folks might end up revisiting it more often. After all, Metallica is still a great band, but who really listens to W.A.S.P. anymore?

“CREATION IS VIOLENT” - Kinski’s final years and the best bonus feature ever.