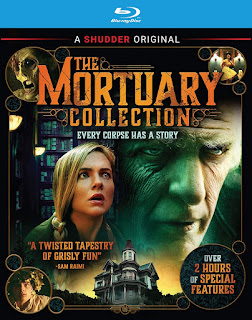 In a perfect world, the great Clancy Brown would be the sinister host of a late-night show on some local independent TV station, glowering into the camera as he introduces yet-another B-movie relic from the vault, using that malevolent baritone voice we’ve all come to know and fear. To kids all over town, staying up way past their bedtime every Friday, he'd be a local hero.

And who knows...if he ever decides to retire from the Mr. Krabs business, maybe Clancy can set-up shop at some local channel in Urbana, Ohio and scare the shit out of a new generation of kids.

And in that same perfect world, there would be room on Shudder for another anthology series. Not only are the segments in The Mortuary Collection as creative and well-produced as any episode of Creepshow, it has a framework that would lend itself perfectly to a TV show...with Brown as your indelible host.

That framework features Montgomery Dark (Brown), a droll, sunken-eyed mortician in the small town of Raven’s End. Despite his advanced age and relatively mild demeanor, there’s something unsettling about him, almost as though he gets a little too into his work. When a freshly-hired young woman, Sam (Caitlyn Custer), becomes morbidly curious about some of the stories he has about his job, Montgomery - Monty, to her - is happy to oblige.

Those stories make up the bulk of the film. The first is a quick-&-dirty tale of comeuppance in which a pick-pocketer gets what she deserves. In the second, a cocky college douchebag learns the hard way why he should’ve used protection when seducing a mysterious young girl, ending up as the one who’s pregnant. Arguably the funniest segment, it is also the sickest, featuring a hilariously grotesque labor scene. In the next story, a married man realizes the term, “‘till death do us part,” may not be when he thinks it is after killing his invalid wife. This one is also darkly humorous, especially as complications arise when he’s trying to dispose of the body.

The final story, told by Sam this time, is the best one. An homage to both the original Halloween and a short writer-director Ryan Spindell once made called “The Babysitter Murders” (shown as a movie within the movie), this one turns the slasher genre on its ear with some unpredictably wild twists. That last segment sets-up the conclusion of the framing story, where neither Sam nor Monty are quite who they originally seemed.

Funny, clever and often gruesomely violent, The Mortuary Collection is given additional boost by atmospheric direction, good performances and gorgeous production design, the last of which has sort-of a disorienting effect; there’s a lot of attention to period detail, but exactly what period remains an intriguing mystery. And at the film's center is Brown, who’s clearly enjoying himself and a hell of a lot of fun to watch.

In fact, I wouldn’t mind seeing a lot more of Montgomery Brown, if not as the host of a regular anthology series, then at-least a sequel or two. Maybe in a perfect world.

14 FEATURETTES - More than just short promo clips, most of these feature extensive interviews and behind-the-scenes footage from all aspects of the production. They run from 1 to 22 minutes each, our favorite being the production design feature, mainly because that’s where we learned the movie was practically shot right in our backyard (Astoria, Oregon).