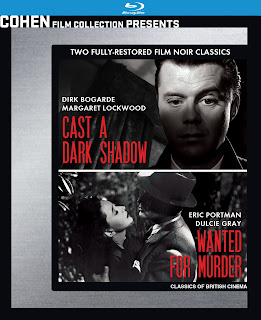 Some aesthetic similarities notwithstanding, I don’t think either of these films really qualify as true film noir, despite what the cover and synopsis suggest. Still, both are solid mid-century British thrillers, each with vividly-depicted antagonists as the main characters.

Conceptually similar to Gaslight, 1955’s Cast a Dark Shadow has a young Dirk Borgarde as “Teddy” Bare, and right from the get-go, it’s obvious he has nefarious plans for his wealthy older wife, Monica, before he utters a single word. Our suspicions are confirmed a few scenes later when he arranges her death to look like an accident. But just his luck...he offs her before she has the chance to amend her will to leave everything to him. All he inherits is the house, while Monica’s estranged sister gets the fortune. Though family lawyer Mortimer (Robert Fleming) suspects foul play, Teddy’s already preying on the next gullible gal, Freda (Margaret Lockwood).

For the most part, it’s a pretty interesting story, further complicated by the arrival of Charlotte (Kay Walsh), who’s not what she seems. But it’s Borgarde’s off-kilter performance that ultimately drives the film. Sometimes he’s a suave smooth-talker, others he looks ready to come completely unglued, with a wide range of facial expressions obviously intended to make the audience privy to his real intentions. Subtle, the movie ain’t.

In Wanted for Murder, there’s a serial killer loose in London, who strangles young women and leaves their bodies to be found by police. The unlikely culprit is successful businessman Victor Colebrooke (Eric Portman), the descendant of an infamous executioner who reeeally enjoyed his work. Meanwhile, Chief Inspector Conway (Ronald Culver) races to catch him before he strikes again, exacerbated by Colebrooke’s taunting postcards. Of less interest is the romantic subplot featuring sunny bus conductor Jack (Derek Farr) and record store clerk Anne (Dulcie Gray), who becomes a target after shunning Colebrooke.

Definitely not noir, Wanted for Murder is fast-paced psychological thriller with an antagonist whose facade masks a seriously maladjusted psychopath. In some ways, he’s similar to Norman Bates - though not as introverted - and Coleman plays him perfectly. There’s also a bit of humor in this one, particularly when Conway is dealing with some of his bumbling underlings.

Though both films have been restored for this Blu-ray, I gotta say the sound quality of Wanted for Murder is terrible and ended up turning on the subtitles just to hear what characters were saying. Since there wasn’t the same issue with Cast a Dark Shadow, one must assume they did their best with the print they had to work with. Other than that, this is a good pair of lesser-known British thrillers.

TRAILERS FOR EACH FILM