Getting Witchy with THE RECKONING 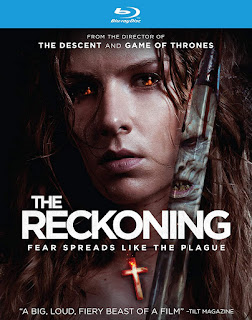 One might understandably assume this is a welcome return to horror by director Neil Marshall. But while The Reckoning is certainly his best film since 2005’s The Descent, I’m not sure I’d classify it as horror.

Set in England during the 17th Century, the country is besieged by the Black Plague, which claims the husband of Grace (Charlotte Kirk). Alone to maintain the farm and take care of an infant daughter, she owes rent to Pendleton (Steven Waddington), the powerful local squire who owns the land and is indifferent to her circumstances.

This is also the age when running afoul of the wrong person can get you branded as a witch, which Grace does when she refuses to provide sex in-lieu of rent and fights back as he attempts to rape her. Because of his power and influence, she’s separated from her baby and imprisoned to face charges of witchcraft. Pendleton sends for John Moorcroft (Sean Pertwee), who’s notorious for using extreme methods to get confessions out of those accused.

What follows is a middle act in which Grace is repeatedly subjected to horrific torture. Yet to Moorcroft’s chagrin, she clings to the truth of her innocence and refuses to confess. This turns into a battle of wills between the two. Meanwhile, Pendleton appears to take perverse pleasure in her suffering. When she’s not enduring torture, Grace experiences dreams and hallucinations, some of her dead husband, others of the devil himself.

Any actual horror elements are regulated to Grace’s visions. Instead, a good portion of the story plays like the ending of Braveheart. The Reckoning is smaller in scope, but nearly as brutal and some of the torture sequences are tough sledding. By the final act, however, the film begins to take shape as a revenge fantasy, and after all that Grace has endured thus far, we’re more-than-ready for it.

Considering its limited budget, The Reckoning is effective in depicting the 17th Century through authentic-looking locations, creative set design and occasionally obvious CGI.  While it often has the aesthetic of horror, including Marshall’s penchant for bloodletting (though he shows admirable restraint at times), the film is ultimately driven by the escalating conflict between Grace and Moorcroft. As such, it’s often gripping. With Grace, Marshall creates another strong-willed female protagonist, well performed by Kirk. Pertwee, however, steals the movie, deftly conveying Moorcroft’s belief that, despite his atrocities, what he’s doing is righteous.

While not quite the horror film one might have been hoping for, The Reckoning tells an interesting story, features a couple of despicable antagonists and comes to a satisfying conclusion. It may not have werewolves, cave-dwelling mutants or cannibal road warriors, but it’s certainly Neil Marshall’s best work since those days.