THE BLOODHOUND and the Road Trip 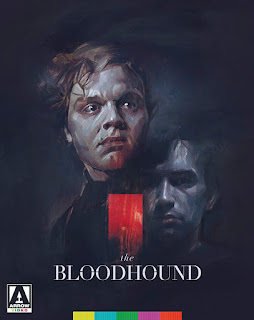 They say the journey matters more than the destination. In the case of The Bloodhound, the adage definitely applies, especially since it often doesn’t appear to have a destination...much like every spontaneous road trip I've ever taken.

That isn’t necessarily meant as criticism. Whenever I’ve listened to Pink Floyd’s Dark Side of the Moon, I cared less about Roger Waters’ metaphorical cynicism than kicking back to let the music carry me away. If you’re similarly able to focus on the music over the message, The Bloodhound isn’t without its rewards.

Wealthy-but-reclusive J.P. (Joe Adler) invites displaced childhood friend Francis (Liam Aiken) to the home he inherited after his parents died. J.P. is an oddball, to say the least...sickly, agoraphobic and distrusting of outsiders, he hasn’t left the house in two years, content to live off his inheritance while taking care of his sister, Vivian, who’s even more reclusive, almost never leaving her room. In fact, since we only ever see her when she ventures into Francis’ room at night, we entertain the notion she might already be dead.

J.P. and Francis’ conversations are interesting, if often one-sided, with J.P.  doing much of the talking. It’s immediately clear he ain’t quite right in the head, nor does Francis turn out to be the trusted lifelong friend we first assume (though he obviously cares for both J.P. and Vivian). There’s also conflict, sometimes subtle, sometimes violent. Meanwhile, the house may or may not be haunted, or possessed, or alive (we’re never sure), exacerbated by a hooded figure that comes-and-goes, crawling on all-fours from the house to a nearby pond and back again...

...or something like that. Writer/director Patrick Picard seldom provides answers and may not even know them himself, which will probably frustrate the hell out of some viewers. Though never particularly scary, there’s a definite horror vibe throughout the proceedings from the very first scene. It may be all for naught, but in the moment, The Bloodhound manages a quietly unnerving tone, even when we’re not always sure why we’re creeped out.

The film is aided considerably by its characters and setting. With the exception of a late-inning moral dilemma, Francis is mostly a casual observer, but J.P. is uncomfortably compelling - right down to his appearance and expressions - and he’s well played by Adler, who conveys menace even when displaying generosity. The house itself is a bizarre creation, massive-yet-claustrophobic, with ‘70s-style architecture, narrow rooms, dim lighting and stark decor. It's practically a secondary character.

Though The Bloodhound does come to an interesting conclusion, I imagine some viewers will walk away unimpressed - perhaps irritated - with a denouement that doesn’t tie-up loose ends into a tidy bow or answer nagging questions (of which there are plenty). But Picard is far less concerned with narrative clarity than creating a singular mood, which he manages to do quite well. He also knows not to test the viewer’s patience for too long. Running a relatively brief 71 minutes, The Bloodhound is like a quick road trip with no real destination in-mind and coming to a conclusion just before everyone gets tired of sitting in the car.

“ON THE TRAIL OF THE BLOODHOUND”- An entertaining making-of doc, featuring behind-the-scenes footage and cast & crew interviews.

4 SHORT FILMS BY DIRECTOR PATRICK PICARD - “Bad Dream”; “The Muffled Hammerfall in Action”; “The Mosaic Code”; “Wiggleworm” (If you think The Bloodhound is weird...)