EACH DAWN I DIE is Gangster Movie Heaven 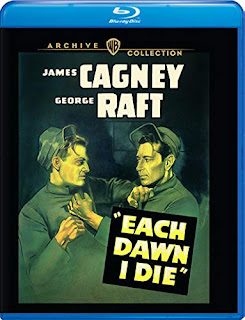 And when two or more of ever them teamed up for a film...man, you’re talking gangster movie heaven.

One such slice of heaven is 1939’s  Each Dawn I Die, featuring the irresistible pairing of James Cagney and George Raft. Cagney plays somewhat against-type (at the time) as Frank Ross, an ambitious, dedicated reporter on the verge of exposing a corrupt district attorney. Instead, he is framed for manslaughter and sentenced to 20 years in prison.

While his girlfriend, Joyce (Jayne Bryan) works to prove his innocence, Ross befriends notorious mob boss “Hood” Stacy, currently serving 199 years. Ross may be ‘fresh fish,’ but he’s resilient and learns the ropes of prison life quickly, which includes keeping your mouth shut. When a stoolie is murdered, Ross assumes Stacy did it but says nothing, even though ratting him out could lead to an early parole.

The riot and escape attempt during the final act is not-only exciting and tension-filled, it’s surprisingly moving, as when Stacy realizes Ross may be the only genuine friend he ever had, one who might be worth dying for. But we wouldn’t care about their friendship if it didn’t feel authentic, which is why Cagney and Raft are ideally cast. They play off each other perfectly as their characters’ evolve and develop mutual respect, despite their disparate backgrounds.

Running a lean, mean 92 minutes, Each Dawn I Die showcases two of Hollywood's greatest classic tough guys in top form. Their undeniable chemistry is a hell of a lot of fun to watch and the main reason the film works so well. It’s a match made in gangster movie heaven and a must-own for anyone who loves the genre. In addition to a great Blu-ray transfer, this disc boasts more substantial bonus material than the typical Warner Archive release, if not related to the film itself, then at least from the same era.

“STOOL PIGEONS AND PINE OVERCOATS: THE LANGUAGE OF GANGSTER FILMS” - A terrific retrospective doc on the impact and influence of naturalistic dialogue used in many early gangster pictures, featuring interviews with various contemporary critics, writers, directors and actors.