SKYFIRE is a Fiery Throwback 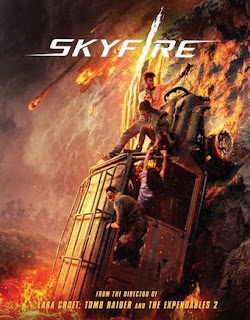 Skyfire is an old school disaster movie, which we don’t get enough of these days.

I grew up on these things...the big crisis, the subplots, the melodrama, the spectacle. Movies like Earthquake and The Towering Inferno were a big part of my childhood. But all good things come to an end and the genre’s popularity waned by the late ‘70s, descending into self-parody long before Airplane! drove the final nail in the coffin. Or so it seemed.

The genre was never rendered completely extinct. There was a brief resurgence in the ‘90s and many FX-driven action epics like the Die Hard franchise were still disaster movies at heart. Other films operated under the guise of true stories (Deepwater Horizon), survival dramas (The Grey) or science-fiction (The Wandering Earth). Still-others strived for a level of realism that Irwin Allen couldn't be bothered with, such as The Wave or Greenland.

But like the brilliantly-bonkers Dwayne Johnson vehicle, San Andreas, Skyfire has no pretense of what it really is: A big, ballsy throwback to disaster epics of yesteryear and presented without an ounce of cynicism. It’s confident enough to take its wild premise more-or-less seriously, yet still aware the audience likely won’t. As such, the film is chock-full of tropes it would be criminal not to include:

Skyfire is utterly ridiculous but massively entertaining. After briefly introducing the main characters, the story seldom stops to take a breath as it jumps from one crisis to the next. While we may question the film’s realism, the special effects are excellent, with harrowing sequences of pyroclastic clouds enveloping the island, lava bombs raining destruction and rivers of cascade lava.

And like the best disaster movies of the ‘70s, Skyfire boasts engaging characters, no matter how broadly drawn they might be. We care what happens to most of them - even the greedy businessman - which renders the action sequences far more suspenseful than if they were just volcano fodder. Though the film is Chinese, it is directed by Simon West, who’s probably best-known for Con-Air (which also has the heart of a disaster movie). While he’s helmed a lot of garbage in the interim, here he shows he hasn’t quite lost his flair for large-scale, over-the-top action.

Since disaster has been my favorite genre since the glory days of the 1970s, my appraisal might be considered overly generous. I imagine there are plenty of hopelessly cynical viewers who’ll scoff at the inherently-goofy premise and wild implausibilities. But for old school fans who feel those same qualities are part of what makes the genre endearing, Skyfire is a blast.
KITTY CONSENSUS: