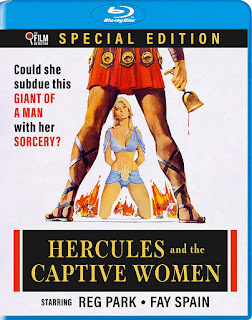 A little clarity is in order. This Italian relic was first released in 1961 under the title, Ercole alla conquista di Atlantide (Hercules and the Conquest of Atlantis). It was edited, rescored and more luridly retitled Hercules and the Captive Women for its U.S. release in 1963 (atrociously dubbed, of course). But as far as one certain group of fans is concerned, this particular sword & sandals epic hails from 1992.

That’s when the film found its way to the Satellite of Love for some good-natured ridicule on Mystery Science Theater 3000. Like The Film Detective did with their 2019 release of Eegah!, this Blu-ray includes that episode as a bonus feature. While it’s always enjoyable to watch Joel and the boys, this one doesn’t rank among their classics. Perhaps part of it is due to the fact that - unlike much of the low budget dreck Dr. Forrester throws their way - Hercules and the Captive Women is actually pretty well produced and originally filmed in 70mm. There are still laugh-out-loud comments, but they don’t come as frequently.

The film itself ain’t half bad for what it is...a prime example of imitative epic storytelling Italy was prolifically cranking out at the time. Though certainly a silly product of its era and country of origin, the film boasts pretty decent production values. English bodybuilder Reg Park - who would do four more Italian Hercules movies - is similarly impressive to look at, though his thespian skills tend to make Arnold Schwarzeneggar look like Daniel Day Lewis.

And be aware that this disc features the American version, meaning the daffy dubbing remains part of the fun, even without additional robot commentary. The film has also been given a really nice 4K restoration. Just check-out the stark difference in picture quality from the unrestored MST3K version!

“HERCULES AND THE CONQUEST OF CINEMA” - Pretty interesting 20 minute documentary about the character’s impact in movies, particularly in Italy.