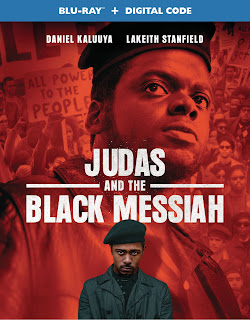 Review by Stinky the Destroyer😻

Shameful confession time: Prior to watching Judas and the Black Messiah, I couldn’t have told you who Fred Hampton was. Nor did I know much about the Black Panther Party beyond what I’ve seen in other movies, where they were always depicted as militant and dangerous. As far as my education goes, I’m of the age when high school history curriculum mostly consisted of everything white Americans did right and pretty-much ended at 1960.

I also have no idea how much of this biopic is historically accurate, nor would it affect my opinion if I did. It depicts Hampton and the Black Panthers as passionate activists rather than terrorists, yet fully prepared to go to war over systematic oppression endured by all minorities (not just African-Americans). As shown in the film, not-only is their distrust of the police well-founded, not much has changed in the 50 years since. Considering current racial tensions in this country - nearly all of it perpetrated by white authority figures - one can’t help but come to the conclusion that any dramatic liberties taken by the narrative are probably few and far between.

I do know one thing for sure: Judas and the Black Messiah deserved every Oscar it was nominated for and should have won more than it actually did (including Best Picture). In my opinion, it was also snubbed in a few other major categories, such as a Best Director nod for Shaka King, who creates an urgently-paced narrative structure remarkably similar to The Departed. I’m not yet ready to declare King the next Martin Scorsese, but when one considers his only other feature film was something called Newlyweeds, he manages to put together a relentlessly compelling film that’s not-only culturally relevant, it’s almost epic in scope.

Of course, Daniel Kaluuya and Lakeith Stanfield were both nominated for Best Supporting Actor, though that’s sort of a disservice to their performances since they're co-main characters and have equal screen time. Kaluuya won the award, but throughout the entire film, I kept debating over who actually deserved it. As Panther leader Fred Hampton, Kaluuya instills the character with a perfect balance of fortitude, recklessness, compassion and integrity. He’s flawed, but not only does he earn our empathy, we genuinely admire him. On the other hand, Stanfield has the more difficult task of making car thief Bill O’Neal - who infiltrated the Panthers for the FBI to avoid jail - a sympathetic character. He conveys Bill’s inner conflict and ultimate self-loathing with affecting subtlety, so it’s difficult to view him as a true antagonist.

Besides, Judas and the Black Messiah makes no bones about who the true villains are: The FBI, as personified by agent Roy Mitchell (Jesse Plemons) and director J. Edgar Hoover (Martin Sheen). While Mitchell at-least comes across as human, Hoover is a broadly-drawn, one-note caricature. But since the film strongly suggests Hampton was assassinated by Hoover’s behest, depicting him as a bug-eyed racist gives hatred a face and renders O’Neal’s sins more forgivable.

Alternately eye-opening, enlightening and infuriating, Judas and the Black Messiah is also massively entertaining. Not only does it shine a light on an important African-American revolutionary - and reminds us that not much has changed since then - the film features vivid, engaging characters, authentic dialogue & production design and a killer soundtrack (both the score and H.E.R.’s Oscar winning song, “Fight for You”). Easily one of 2020’s best.

“FRED HAMPTON FOR THE PEOPLE” - Some of the cast & crew discuss the real Fred Hampton.

“UNEXPECTED BETRAYAL” - Similar to the featurette above, only focusing on Bill O’Neal.