The Brawling Babes of SWITCHBLADE SISTERS 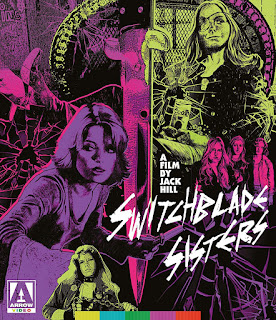 Of course, one could easily argue that without Quentin Tarantino’s ringing endorsement, Switchblade Sisters would have faded into relative obscurity, simply one of countless other ‘70s exploitation flicks promising to serve-up sex and violence in equal measures.

That’s not really intended as criticism, since the film is actually pretty-well made for a brawling babes B-movie. But the fact remains it was Tarantino’s stamp-of-approval which prompted fans, cultists, critics and historians alike to re-assess this film’s importance, influence and - perhaps most significantly - themes of female empowerment.

After viewing Switchblade Sisters for the first time, I doubt co-writer director Jack Hill had anything but profit in-mind. Still, I was a bit surprised that, for a film loaded with gangs, guns and girls, Hill obviously has more reverence and respect for his female characters than the male ones, who are simplistically depicted as thugs, horndogs, dim-bulbs or cannon fodder.

The girls are mostly cartoon caricatures, too, especially gang leader Lace, comically overplayed by Robbie Lee. But the big difference is that they’re strong, assertive and - despite some hot-for-the-70s outfits and an implied rape - aren’t really exploited for their visual assets. In fact, if it weren’t for the language, the film might even squeak by with a PG-13 rating today. Maybe it's that aspect which ultimately left its indelible mark on someone like Tarantino, who’s always created strong, sexy female characters without ever actually sexualizing them.

But aside from all that, Switchblade Sisters is pretty entertaining if viewed in the context of its era, with a pseudo-grittiness more akin to an intense Afterschool Special (remember those?) than an authentic look at gang life. And that’s okay because - high-minded retrospective analogies notwithstanding - the film makes no pretense beyond creating cheap thrills at a cheap price. As such, it’s ultimately one of Jack Hill’s better films. On a personal note, since I once had a brief boyhood crush on Joanna Nail, who plays Maggie, it was kinda cool finally seeing her in something besides The Gumball Rally.

In addition to a pretty impressive transfer, Arrow Video includes another fun batch of bonus features. Most of them are older but no-less interesting, some of which might help the viewer appreciate the film a bit more. Speaking of which, I’m kinda surprised the audio commentary Tarantino did for a previous DVD wasn’t carried over to this one. He is the movie’s biggest fan, after all.

AUDIO COMMENTARY - By historians/critics Samm Deighan & Kat Ellinger. It’s definitely worth a listen, but it’s too bad the commentary Tarantino did for the original DVD release isn’t included.

TRAILERS - From various Jack Hill-directed films, including The Jezebels (this film’s original title).

REVERSIBLE COVER - Features new and vintage cover art (we kinda like the new one!).