THE VIRTUOSO and the Chatty Cathy 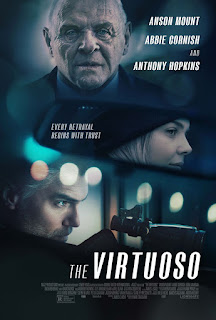 The Virtuoso starts off with a bang...literally...in more ways than one.

Our would-be protagonist and not-so-humble narrator is an assassin for-hire. We get a look at his handiwork when he applies some violent coitus interruptus with a high-powered rifle, taking-out his mark from a distance without harming the woman straddling him.

It’s the most shocking, outrageous and original scene in the entire movie. The rest doesn’t even come close.

Imagine a version of 1972's The Mechanic where Charles Bronson never shuts up. That’s sort-of what The Virtuoso plays like. Not that this unnamed killer (Anson Mount) converses much with the other characters. However, he talks our ears off with completely unnecessary voice-over narration, coldly mansplaining the meticulousness required for his profession, even as we’re watching him being meticulous.

But apparently not meticulous enough, when the next job results in collateral damage - a young mom’s violent, fiery death. It continues to haunt him and ultimately affects his decision-making. After giving the worst pep-talk of all time, his mentor (Anthony Hopkins) gives him a new assignment: To go to a small-town diner and wait for his next mark. He’s given no name or description, just two cryptic words...White Rivers. There are a few customers at the diner - all of whom could be potential targets - along with an wanton waitress (Abbie Cornish) who practically throws herself at him.

It’s at this point when The Virtuoso not-only turns overly-serious, plausibility takes a backseat as the assassin starts picking-off his potential marks one-by-one. And for someone who’s simply identified in the credits as “The Virtuoso,” he doesn’t really demonstrate a lot of virtuosity. There’s also a far-fetched story twist brewing, which the narrative spoils way too early by clumsily-inserting several scenes of Hopkins seated at a desk with cellphones and a gun.

Speaking of Hopkins...aside from the aforementioned pep-talk - a Vietnam War anecdote that seems to go on forever - he almost literally phones-in his entire performance. Nice work if you can get it, but anyone expecting him to be a major player in the story will be sorely disappointed. Instead, we get Mount in nearly every scene, required to do little more than glower. Aside from a brief bout of remorse over killing the mom, his character is virtually expressionless...your standard-issue, high-tech, sharply-dressed killer-for-hire.

Brooding, implausible and devoid of engaging characters, The Virtuoso fails to deliver on the promise of its morbidly amusing opening sequence. A shame, really. Had it not taken itself so seriously, this could have been a fun little film.