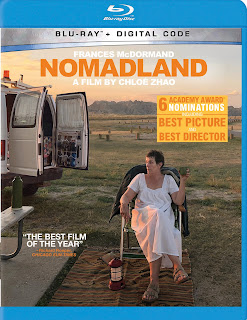 Two questions and one takeaway came to mind after finally experiencing Nomadland (and I think ‘experiencing’ is the right word).

First question:  Does it deserve the six Academy Award nominations it’s up for this year? Certainly. Nomadland is a low-key, slice-of-life character study which, on the surface, doesn’t seem to have any direction or destination in-mind...much like the main character. But it’s also the kind of film that sneaks up on you. By the time it’s over, you realize there’s a lot to unpack because quite a bit has actually transpired. I was near tears as the end credits rolled, though I couldn’t have told you why at the time.

Second question: Would Nomadland have gotten all those nominations if COVID hadn’t cleaned the slate of most of its competition? Hmmm...that’s difficult to say since you could arguably ask the same question about all of this year’s Best Picture nominees (except maybe for Mank because the Academy loves movies about movies).

One thing is certain: Frances McDormand not-only deserves her Best Actress nomination, she probably would have gotten it regardless of the competition, and if I were a betting man, I’d wager she’s probably going to win (which would be her third Oscar). Disappearing into her role as recently widowed transient Fern, this is McDormand’s best performance since Fargo.

The “story,” so to speak, is a year in the life of Fern, more-or-less the last person to leave Empire, the company town where she and husband Bo lived and worked. She takes to the road in a ramshackle van, working various seasonal jobs and meeting a variety of similarly displaced folks. A few of them drift in and out of her daily life, such as Swankie (Charlene Swankie), who has terminal cancer and is reflective of her life, and Dave (David Strathairn), who is somewhat smitten with Fern and eventually offers a lifeline out of her nomadic existence.

However, Fern seems unable or unwilling to form any long-lasting friendships, despite caring deeply for the people she meets. Maybe she’s still mourning, maybe she hasn’t found what she’s looking for or maybe she’s simply seeking a clean break from her previous life. We never know for sure...at least until the final shot. What makes Fern such a compelling character is a combination of director Chloe Zhao’s deceptively complex screenplay and McDormand’s affecting performance. Relatively quiet and reserved, we learn more about her through actions and expressions than words or exposition. And it’s only when she’s alone that Fern ever seems to let her emotional guard down.

My one (superficial) takeaway: Nomadland could be seen as the first horror film for the 60+ set. Most of its characters appear to be seniors, either left behind by the system, losing everything they’ve achieved or - most distressingly - rendered rudderless following the death of someone close. Vicariously experiencing what these people have been forced to leave behind, I can safely say that, at my age, the prospect of outliving my wife is more terrifying than a dozen chainsaw massacres.

Extraordinarily poignant without ever lapsing into heavy-handed sentimentality (though the temptation had to be strong), Nomadland has the viewer poised for an emotional crescendo that never actually comes. Instead, the story defies expectations by coming full circle without any kind of obvious resolution. But that’s only on the surface. Upon reflection, we realize we have been experiencing Fern’s character transformation and life-changing epiphanies the entire time.

TELLURIDE PREMIERE Q&A - Held at a drive-in (sign of the times) with Frances McDormand, writer-director Chloe Zhao and a few other members of the cast.