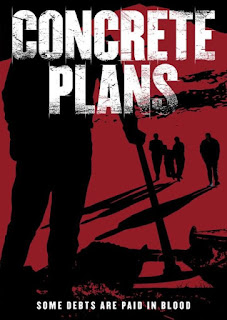 In Concrete Plans, an already bad situation spins wildly - and violently - out of control, mostly through the actions and poor decisions of its characters. We’ve seen similar scenarios in such classic black comedies as Fargo. However, if there is any humor to be mined from this grim, downbeat film, it's buried pretty damn deep.

That's not to say it isn’t interesting. Cocky young heir Simon (Kevin Guthrie) hires five guys to renovate the country house he inherited, a job that will take a few months, with the crew living on the premises. However, he treats them like shit, being verbally abusive and refusing to provide livable conditions. Simon also puts off paying them, which doesn’t sit well after a while.

It turns out that not-only is Simon a shady investor, but he’s heavily in debt and can’t pay them. When the crew finds out, things get ugly, especially when short-fused Jim (Chris Reilly) takes charge. Jim’s also a fugitive after killing a man during a botched robbery, so he has no qualms about torturing Simon for what they’re owed.

Not everyone is on-board, however. Viktor (Goran Bogdan), who sends his wages home to his daughter, is sort-of the de-facto protagonist, while kindly but weak-willed supervisor Bob (Steve Speirs) is increasing horrified over the measures they’re taking to get paid (though he does go along with it). Things get out of hand as conflicts escalate, of course, especially once Simon’s fiancee (Amber Rose Revah) returns home.

Though the chance to turn the scenario into a wicked black comedy is definitely a missed opportunity, Concrete Plans is well-paced and features solid characters. Viktor and Bob serve as moral compasses, while Jim and Bob’s nephew, Steve (Charlie Palmer Rothwell), evolve into hateful sons-of-bitches. There’s also a lot of perverse gratification in watching Simon get what’s coming to him, mainly because we’ve all encountered assholes with a similarly-misguided sense of superiority.