Three's Not a Crowd in ANOTHER THIN MAN 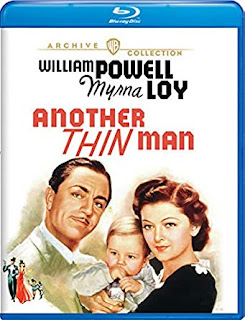 Here’s hoping Warner Archive is finally committed to releasing all of the Thin Man movies on Blu-ray.

After the first - and still best - was released back in 2019, I was reminded of just how timeless and funny these films are. But could I find any of the others - even on DVD - without skipping a mortgage payment? Sure, TCM has the occasional Thin Man marathon, but it just ain’t the same as binging on them whenever I damn well please. I guess I was just gonna have to wait & hope.

But this year, we’ve gotten two more in quick succession. The second film, After the Thin Man, arrived in January. Though not quite as fresh as the first film, as sequels go, it was a worthy follow-up and ended with Nora’s (Myrna Loy) announcement that a baby was on the way. In Another Thin Man, the Charles’s are now a family with little Nick Jr. (of course) approaching his first birthday.

But adding a kid to the mix isn’t some gratuitous plot device. It’s genuinely fun seeing Nick & Nora (and Asta!) adapt to parenthood in their own indubitably unflappable fashion. Speaking of Asta...the Charles’ perky pooch doesn’t take a backseat to the new arrival. He still has plenty of hilarious scene-stealing moments.

Nor does family life interfere with the job, as Nick (William Powell) reluctantly accepts an invitation from Colonel Burr MacFay (C. Aubrey Smith), a former business partner of Nora’s father who’s being threatened by local gangster Phil Church (Sheldon Leonard). However, when Burr ends up dead, there are many suspects, including Nick himself, though he and Nora are amusingly unfazed by the accusations.

But as usual, the plot is perfunctory. What really matters are our two protagonists, who remain insanely likable, especially when engaging in playfully antagonistic banter with each other. Powell & Loy’s natural chemistry has always been the driving force behind the series and the addition of another Charles doesn’t detract from that. If anything, the kid makes them even more endearing.

And with this Blu-ray coming so soon after the last one, here’s hoping Shadow of the Thin Man is in the pipeline.

MEE-OW! LIKE TAUNTING A MOUSE TO DEATH.
Posted by D.M. Anderson at 1:59 PM