DEEP BLOOD and the Great Shaming 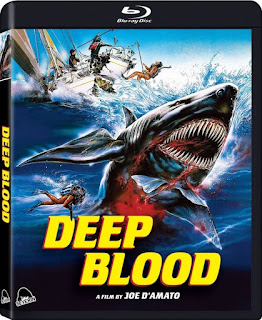 “Get back to the harbor immediately, Shelby! You should be ashamed of yourself!”

“Get back to the harbor immediately, Shelby! You should be ashamed of yourself!”

That line from Deep Blood now ranks right up there with “You’re gonna need a bigger boat” as one of my all-time favorite quotes from a shark movie. I’m even thinking of slapping it on a t-shirt. What makes it so damn funny is the context: Late in the film, a well-meaning dad (Shelby) takes teenage son Ben & his buddies onto the ocean to kill the shark that gobbled down one of their friends. When a police copter approaches the boat, one of the officers grabs a bullhorn and shames Shelby like a stern parent. But it must have worked because Shelby does-indeed return to shore as ordered, he and the boys looking as if they’ve just been grounded.

The reason I quoted it twice is because the exact same bullhorn-berating scene is repeated only seconds later. I don’t know whether or not that was intentional, since this is Joe D’Amato we’re talking about and he was never renowned for his meticulousness. It’s quite possible he spotted the error in the final print and decided “aw, fuck it,” the same way a seventh grade slacker can’t be bothered to proofread. At any rate, Joe should have been ashamed of himself!

That daffy bit of dialogue is part of what makes Deep Blood such a hoot. This Italian Jaws rip-off - one of many - was actually shot in Florida with American actors, so there isn’t the added fun of atrocious dubbing. However, the performances are often hilarious, especially the “teenage” cast who ultimately take it upon themselves to try and destroy the Great White Shark that’s been killing their friends and neighbors (armed with enough dynamite to level Madison Square Garden, I might add). There’s a good reason why most of these actors remained anonymous.

It’s hard to pick which performance is best, but if forced to choose, I’ll go with Frank Baroni as Miki, who hisses all his lines through clenched teeth, save for the scene where he watches helplessly on the dock while best buddy John becomes fish food. Instead of screaming and looking horrified, he simply gazes sadly at the attack as though a bully just stole his lunch.

Elsewhere, mediocrity reigns. The film is occasionally dull as dishwater and nearly all the shark scenes consist of stock footage. But in addition to the performances, things are often livened by goofy subplots: the girl who forces her boyfriend to choose between her and the shark; the bully whose merciless cruelty throughout the film is forgiven with just a handshake (probably because he has all the dynamite); the boy who’d rather play golf than go to college; the father and son who declare their mutual hatred before immediately apologizing to each other; the sheriff who makes Buford T. Justice look like Frank Serpico. These subplots are actually more like sketches, since D’Amato doesn’t stick with any of them very long.

Speaking of our esteemed director...considering Joe D’Amato’s somewhat infamous reputation in exploitation circles, one would assume Deep Blood is chock full o’ boobs, blood & body parts. On the contrary, the film has no sex or nudity, and aside from a bit of (pink) blood in the water, it ain’t really all that violent, either. Even compared to the PG-rated terror of Jaws, the whole thing is pretty benign. For curious D’Amato fans, this news will come as a massive disappointment (maybe that's why he originally directed it uncredited).

Still, Deep Blood boasts just enough camp value and unintentional chuckles to make it worth checking out, if only to see Shelby get publicly shamed by the law...twice (even though he wasn’t doing anything illegal!). Though it’s been nicely restored by Severin Films, this disc is sadly lacking any bonus features besides a trailer. Too bad...I would have loved to hear what some of the surviving cast had to say about their 91 minutes of fame.

Now excuse me while I go have that t-shirt made.