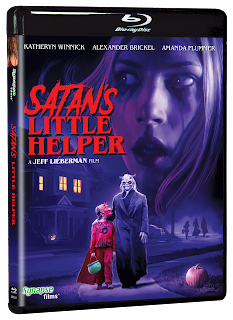 Not the most prolific guy on Earth, writer-director Jeff Lieberman has nevertheless cranked out his fair share of horror films which eventually became minor cult classics. His best-known is probably Squirm, which oozed into theaters in the mid ‘70s. While not a great film, it remains undeniably effective, arguably due more to the icky special effects than anything else.

While Lieberman’s work will never be mistaken for John Carpenter’s, he’s always been quite adept at putting together pretty decent films with limited resources (better than Sean S. Cunningham, anyway). 2004’s Satan Little Helper was his first feature film in 16 years and remains his last one to-date. Watching it now, I have to wonder what devilish force keeps him from directing more often, especially since this one is the most entertaining movie he’s ever done.

Satan’s Little Helper is a horror comedy that takes place on Halloween. Nine-year-old Dougie (Alexander Brickel) is almost autistically obsessed with a violent video game called “Satan’s Little Helper.” At the same time, a serial killer (Joshua Annex) in a devil costume is slaughtering locals, then hiding them in plain sight as Halloween decor. When Dougie spots him, he thinks it’s Satan himself and offers to be…well, his little helper. Their ‘adventures’ together are morbidly amusing, such as ‘Satan Man’ getting rid of Alex (Stephen Graham), the boyfriend of Dougie’s sister, Jenna (Katheryn Winnick). The most uproarious scene has Satan Man pushing Dougie around in a shopping cart - after robbing the store of candy and murder supplies - to mow people down (including a pregnant woman and a baby in a carriage!).

Also amusing is Amanda Plummer and her indelible brand of kookiness as Dougie’s mom, who generally takes a blind eye to her kid’s weird behavior. Speaking of which, one of the film’s few liabilities is that Dougie isn’t a particularly likable character, nor is Brickel all that great in the role. Conversely, Annex is alternately funny and menacing as Satan Man, which is kinda remarkable when one considers he never speaks, nor do we ever see his face. Elsewhere, Lieberman makes the most of his twisted premise with amusing characters, funny situations, clever plot turns and a few nifty kills.

Though occasionally gory, the overall tone of Satan's Little Helper is surprisingly light until the final act, which culminates in denouement that’s genuinely creepy. In other words, it’s perfect viewing for the spooky season…not always subtle or in good taste, but a lot of disreputable fun.