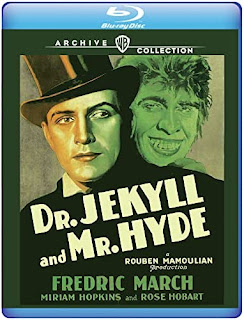 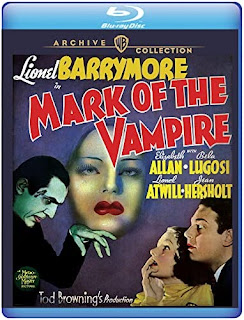 DR. JEKYLL AND MR. HYDE and MARK OF THE VAMPIRE (Blu-ray Review)
FROM WARNER ARCHIVE COLLECTION
Review by Josey, the Sudden Cat🙀

Just in time for Halloween, Warner Archive unleashes a couple of new-to-Blu-ray terror titles. One is the definitive adaptation of a classic story. The other is far less essential, but both have been nicely restored.

Earlier this year, Warner Archive released the 1941 version of Dr. Jekyll and Mr. Hyde. While that film has its moments, overlength and a campy performance by Spencer Tracy tended to undermine the tension. The 1932 version, however, is classic sci-fi/psychological horror. Even 90 years later, it remains the best adaptation of Robert Louis Stevenson’s novel.

Fredric March is excellent as the title character(s) and won a well-deserved Oscar for his performance (making Dr.Jekyll and Mr. Hyde the first horror film to win in a major category). He’s amazing to watch, managing to gain our sympathies as Jekyll and our repulsion as Hyde. The latter is one of early horror cinema's more disturbing creations, not just because of the make-up effects (and still-excellent transformation scenes), but his overt sadism and cruelty toward Ivy (Mirian Hopkins), the object of his animal lust.

Released pre-Code, Dr. Jekyll and Mr. Hyde was pretty risque and brutal for its time. The film implies more than it actually shows, but it's obvious that Ivy is repeatedly sexually assaulted. There’s an air of hopelessness to her character that’s difficult to shake (which is perhaps scarier than the film’s traditional horror elements).

“THEATRE GUILD ON THE AIR” - Audio only, radio broadcast from 1950.

MARK OF THE VAMPIRE
1935 / 60 min
Despite the title, Bela Lugosi and direction by Tod Browning, Mark of the Vampire is not the film you think it’s going to be, nor does it come close to the atmospheric artistry of Dracula. It’s ultimately a shaggy dog story masked as a horror film, and considering the talent on both sides of the camera, pretty inconsequential.

In a small village where vampire legends loom large, a man is murdered in his house, discovered with a couple of puncture wounds on his neck. The local doctor declares him murdered by a vampire, but Inspector Neumann (Lionell Atwood) thinks that’s hogwash. Vampire expert Professor Zelen (Lionell Barrymore) believes Count Mora (Lugosi) killed the man and now his daughter, Irena (Elizabeth Allen), is next.

Running only 60 minutes, Mark of the Vampire doesn’t overstay its welcome, but despite a few fleeting attempts at creating atmosphere, the film looks and feels pretty stagy, exacerbated by histrionic emoting from most of the cast. Barrymore is kind of fun, while Lugosi generally just stalks around the set in his cape, never interacting with the main cast. And without providing spoilers, the climax shares more in common with a Scooby-Doo episode than horror movies of the day.

“A THRILL FOR THELMA” - An amusing cautionary short from 1935, demonstrating why crime doesn’t pay.