THE BAT: More Mystery Than Monsters 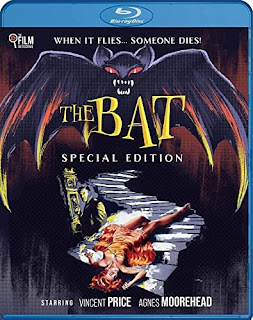 An unassuming little whodunit masquerading as a horror film, The Bat initially feels like two stories are unfolding at once, introducing a couple of villains within the first ten minutes. When it settles into the story, however, it’s clear that both crimes are connected.

Mystery writer Cornelia van Gorder (Anges Moorehead) rents a house owned by bank president John Fleming, though none of the servants stick around for fear of “the Bat,” an alleged “faceless” murderer who’s been killing locals. Meanwhile, Fleming has just embezzled a million dollars from his bank and hidden the money, planning to fake his death with help from friend Dr. Wells (Vincent Price). Instead, Wells kills him.

The police, led by Lt. Anderson (Gavin Gordon), suspect bank clerk victor Bailey (framed by Fleming), but when the Bat repeatedly breaks into the house Cornelia’s renting - obviously looking for something - the audience is made to suspect Wells. After all, he did just kill somebody. The narrative evolves into sort of a cozy mystery, with Cornelia making some startling discoveries about the place she’s rented. But unlike your typical cozy mystery, she doesn’t really turn into an amatuer sleuth. In fact, Cornelia mostly exists to react to events as they unfold.

Still, she’s an entertaining protagonist and wonderfully played by Moorehead as slightly cynical and bemused. One might even look at her performance as a dry run for her Endora character in Bewitched (though less bitchy). Price is his usual self, effortlessly effective as a conniving cad. With a few other suspects thrown our way, the film does a decent job keeping us guessing for a while (at least until the Bat’s identity becomes painfully obvious).

An actual bat does briefly appear, but the scene itself is superfluous and viewers expecting some kind of winged assassin will be disappointed (as I’m sure they were back in the day). The Bat is ultimately a whodunit. Though it sometimes seems like the plot is all over the place, it’s efficiently paced and kind of fun.

“THE CASE FOR CRANE WILBUR” - Featurette about the writer-director, who has a long history dating back to the silent era. He also wrote the screenplay for one of my childhood favorites, 1961’s Mysterious Island.

SUPPLEMENTAL BOOKLET - Features an essay, “The Case of the Forgotten Author,” by Jason A. Ney.