Enjoy THE KINDRED with a Side o' Ham 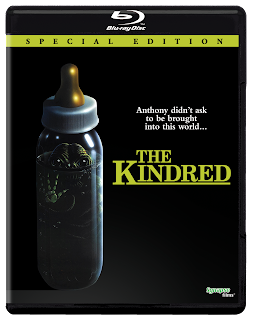 Rod Steiger gets my vote for the hammiest actor to ever win an Oscar. Granted, I haven’t seen everything he’s ever done, but a few notable classics notwithstanding, he’s often hilariously overbearing, especially later in his career. Trust me, you haven’t lived until you’ve seen Steiger chew scenery in such daffy delights as The Illustrated Man, Love and Bullets and American Gothic.

Not that Steiger’s bad at his job. His histrionic performance was the most fun part of The Amityville Horror, giving an otherwise dull, dead-serious film some unintentional levity. He brings the same brand of bombast to The Kindred in another role where we get the distinct impression he thinks working in such B-movies is beneath him (even though he did a lot of ‘em). But unlike The Amityville Horror, this 1987 monster flick is entertaining enough without Steiger…so just think of him as the sprinkles on a sundae.

Steiger’s the most recognizable name in the cast, playing Dr. Lloyd, an unhinged researcher who wants to continue genetic research he began with ailing ex-colleague Amanda Hollins (Kim Hunter, the second most recognizable name, but only in the film about five minutes). However, Hollins’ dying wish is for her son, John (David Allen Brooks), to go to her home and destroy all of her notebooks and research. When he and several friends get there, they find out why. Living in the house are the results of her research…slimy, tentacled monsters, the result of experiments using her son’s DNA. That ain’t a spoiler, folks. Before she dies, Amanda blurts out that John has a “brother” named Anthony.

There are actually several Anthonys - the biggest one living under the house - and for a low budget film, they’re effectively nasty creations. Especially cool is one which bursts from a watermelon to attack an unfortunate victim, tentacles worming their way into her mouth, ears and nose. Yuck! Elsewhere, performances range from dull (Brooks) to delirious (the mighty Steiger). The narrative is sometimes a little convoluted, dragged down by inconsistencies and an unnecessary subplot, but comes together at the end for an exciting climax.

The Kindred would obviously never have existed without bigger (and better) sci-fi/horror hybrids that came before it. But while winning no points for originality, it’s well made and briskly paced, with some enjoyably icky moments. Topping it all off is antiheroic ham-work by Steiger. Synapse Films first-released the film last year as a limited edition SteelBook with a bonus soundtrack CD and booklet insert. This new version doesn’t have those bells & whistles, but the other bonus features are the same, as is the nice 4K restoration.