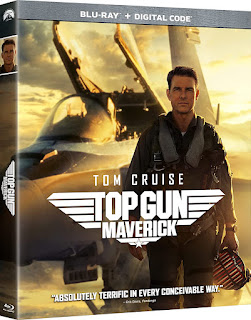 When learning that Top Gun was getting a sequel 36 years later, did any of us honestly anticipate it being anything but another cynically made slab of nostalgia? I know a lot of people still revere that decade, but with a few notable exceptions, the 80s weren't loaded with timeless classics. Typical blockbusters of the time were easy-to-digest, highly-conceptual and obstinately created to sell just as many soundtrack albums as theater tickets. More than any other film released back then, Top Gun was the poster child for everything good and bad about the era…fun in the moment, but certainly disposable. Calling it a classic is more of a statement about the decade's aesthetics than the film itself.

Yet somehow, Top Gun: Maverick works, often brilliantly. It’s a film well-aware of its legacy, generating nostalgic warm fuzzies by opening with a title sequence nearly identical to the original…right down to Kenny Loggins’ stupidly catchy “Danger Zone” booming over the credits. For the most part, the story is similar, too, though perhaps a bit more character driven, with touches of sentimentality largely absent from the first film. Val Kilmer even shows up in a glorified cameo, and as gratuitous as it is, we're happy to see him (especially after all he’s been through).

But after dealing with nostalgic pleasantries, Top Gun: Maverick takes the next logical step to address modern issues facing its main character (Tom Cruise). He’s still a rebellious hot-shot pilot, but time and technology are threatening to render him obsolete. In a way, Maverick seems just as nostalgic for the 80s as the audience. Cruise plays him with just the right amount of pathos…an older, wiser mentor for a new generation of pilots and somewhat remorseful over some of his choices, especially with regards to keeping Goose’s son, Rooster (Miles Teller), from advancing his own Navy career. When they aren’t training for an upcoming mission, the conflict between these two is the crux of the narrative.

Speaking of the mission, it comprises the last third of the story and is as spectacular as it is thrilling. In fact, all of the flying scenes are pretty incredible, though probably not as awe-inspiring in your living room as they were on the big screen. Even if one still views Top Gun: Maverick as nothing more than nostalgic eye candy, the action sequences alone are worth experiencing (and for the most part, accomplished with practical effects).

Not everything works. Hangman (Glen Powell) is a ridiculous character obviously created to give the film its own Iceman. As Mav’s ex-lover, Penny, Jennifer Connelly isn’t given much to do besides encourage him (a role just as superfluous as Kelly McGillis’). There are also some moments that try a little too hard to emulate the original, such as another bar sing-along and a new shirtless beach sports scene (to prove Cruise is still ripped, I guess). Still, Top Gun: Maverick is loads of fun, offering enough prerequisite nostalgia while telling a worthwhile story of its own, more than justifying its existence.