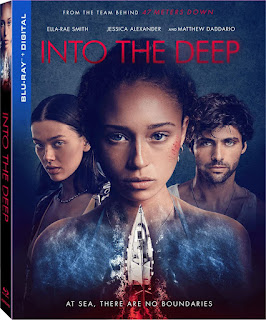 This feels sort of like a throwback to the old video store days when you’d find a lot of steamy thrillers you never heard of. You'd grab one anyway because even if it sucked, there might be enough skin & sex to keep things interesting. And who knows…maybe there’d be the off chance it might actually be good. I don’t know if I’d call Into the Deep a good movie, but after a meandering first half, it has its share of lively moments, even if some are the result of the protagonist’s epic stupidity.

The protagonist in question is Jess (Ella Rae-Smith), a free-spirited girl who meets a vacationing stranger, Ben (Matthew Daddario). He’s got a pretty nice boat, where they party for the rest of the night (among other things). When she wakes up the next morning, they’re at sea, which initially alarms her, but after Ben innocently claims he thought it would be romantic, she’s suddenly cool with it. Then they get down ‘n’ dirty on the deck.

Their little tryst is interrupted when they rescue another girl, Lexie (Jessica Alexander). Three’s company, as far as Ben is concerned, but Jess is more apprehensive. However, both Ben and Lexie convince her to join the party. When Jess awakens after passing out, Lexie has Ben tied up and claims he once drugged and assaulted her on this very boat. Ben says she’s crazy. For much of the middle act, Lexie’s not sure who to believe and keeps waffling back and forth over who’s more convincing (even after Lexie has shown her Ben’s Polaroid stash of past conquests in compromising positions).

A few early subplots go nowhere, like Jess’ estrangement from her dad and a run-in with an angry ex-boyfriend. There are also some superfluous flashbacks that explain her general fear of water, which ultimately have no bearing on the story. But while Jess never comes across as the brightest crayon in the box, her quandary is interesting (though the audience figures out who to trust long before she does).

The performances by the three leads are perfunctory, but they look good in swimming suits - and out of them - a definite selling point for those who go in for this sort of thing. Plotwise, some suspension of disbelief is required. Implausibilities aside, though, Into the Deep is nothing particularly deep, but fairly entertaining if expectations are kept in check...much like those sexy selections we took home in the '90s.