Revisiting Ray in NO ESCAPE 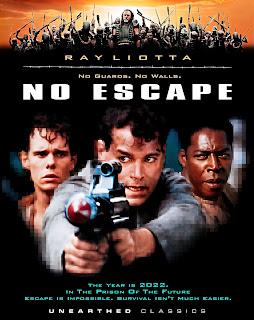 As most of you already know, we lost the great Ray Liotta earlier this year. He had a long career that included such classics and near-classics as Field of Dreams, Unlawful Entry and Goodfellas, the last of which was a breakout role that helped establish his image as a bigscreen tough guy.

Liotta’s been such an indelible presence over the past 30 years that it wasn’t until recently looking over his lengthy filmography that I noticed, in most of them, he was either part of an ensemble cast or played the heavy. 1993’s No Escape is one of the few films where he was not-only the undisputed star, but an action hero (or more accurately, antihero).

In the near future - 2022! - John Robbins (Liotta) is a former super-soldier sentenced to life on an island penal colony for murdering his CO (but he had a damn good reason). Penitentiaries of the future are run by high-tech corporations, and even though prisoners are left to fend for themselves, they’re under constant surveillance by satellites. For the most part, inmates have divided into two factions…the violent, cannibalistic “Outsiders,” led by sadistic sociopath Walter Marek (Stuart Wilson), and the peace-loving “Insiders,” whose leader (Lance Henriksen) is known as Father.

After running afoul of Marek, Robbins is rescued by the Insiders. Though he’s initially reluctant to join their makeshift community - escape is his only goal - Robbins eventually fights alongside them as they defend against repeated attacks from the Outsiders. But among them is a stooly working for the cold-blooded warden (Michael Lerner) who wants to crush the Insiders (the reasons are not really made clear, but we’ll go with it).

No Escape is no classic - maybe not even a cult classic - but remains somewhat revered by those who caught it back in the day. It wins no points for originality, drawing obvious inspiration from the likes of Escape from New York and The Road Warrior, with a little Papillon here and there. However, it’s very well made as these things go, with exciting - and violent - action scenes, imaginative production design and interesting characters. As Marek, Wilson delivers a wonderfully unhinged performance, while Liotta shows he’s more than capable of carrying a film on his shoulders. It’s a shame he didn’t get to do it more often.

I suppose the timing of its Blu-ray debut can serve as sort of a tribute to a long, impressive career. Made and released at the height of his fame, I wouldn’t call No Escape a great film, but it’s a lot of fun and showcases Ray Liotta as a credible action hero. This disc also features a good transfer and a bevy of bonus features that fans should enjoy.

“SURVIVAL OF THE FITTEST: DIRECTING NO ESCAPE” - Audio interview with director Martin Campbell.

“WELCOME TO THE FUTURE: THE SCI-FI WORLDS OF GALE ANNE HURD” - Audio interview with the producer, who also discusses her long career within the genre.