E.T. THE EXTRA-TERRESTRIAL and TO KILL A MOCKINGBIRD: Two Iconic Classics on 4K 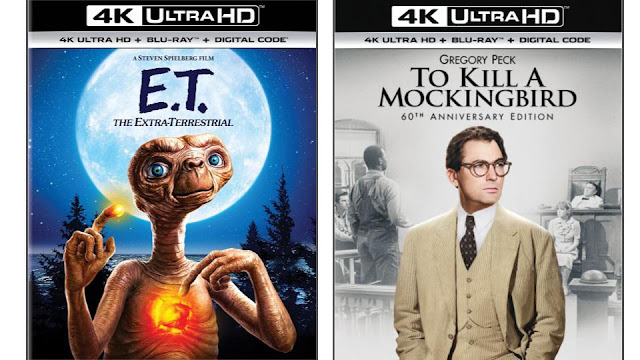 E.T. THE EXTRA-TERRESTRIAL and TO KILL A MOCKINGBIRD (4K UHD Review)
FROM UNIVERSAL
Review by Mr. Paws😸

For their 40th and 60th anniversaries, Universal has released two undisputed classics on 4K, both of which have stood the test of time. Essentially a reissue, E.T. The Extra-Terrestrial is one of the 80s’ most beloved family films, while the newly remastered To Kill a Mockingbird has lost none of its relevance in the six decades since its release.

1982 was definitely the summer of Spielberg. First came Poltergeist, and I doubt there’s too many folks left who don’t think he was the actual director. Then E.T. followed just a week later to become such an instant cultural phenomenon that it made Jaws and Raider of the Lost Ark look like sleeper hits. It was the movie everybody just had to see, the movie that made everybody cry…

…even if they didn’t necessarily want to. I saw it with some friends during its opening weekend back then, and being your typical teenage guy, the last thing I wanted was to be caught crying in front of them. Staving off the waterworks was one of the hardest things I ever had to do in a movie theater (even worse than ignoring my Pepsi-filled bladder during the last hour of Avengers Endgame).

Like The Wizard of Oz, E.T. has since transcended its decade to become an all-time family classic. Despite advances in special effects technology, E.T. himself remains a wonderfully endearing creation. That, along with John Williams’ heart-rendering score and Melissa Matheson’s perceptive script, deserve as much credit for its success as Steven Spielberg. It’s not his best film (that would be Jaws) and marketing over-exposure has arguably diluted some of its charm over the years, but E.T. is easily his most emotionally manipulative.

E.T. was previously released in 4K only five years ago. Having never seen that version, I can’t give any comparison, but the overall picture and sound quality of this one is predictably excellent (one of the better Universal 4K restorations, actually). Also included is a Blu-ray, which also has good tech-specs. Most of the extras are carried over from previous releases, though two new retrospective features are thrown in to entice fans into double-dipping.

“TCM CLASSIC FILM FESTIVAL: AN EVENING WITH STEVEN SPIELBERG” - An enjoyable conversation with Spielberg and TCM host Ben Mankiewicz before a screening audience.

If you’re of a certain age, you might have been expected to read Harper Lee’s To Kill a Mockingbird in high school. And if you were like me, you didn’t bother, opting to wait until your teacher inevitably showed the film afterwards. If you were lucky, the film followed the book close rough for you to squeak by on the final. While I still flunked that test, the film was wonderful, and like E.T., I had to force myself to keep from crying around my peers.

While I can’t speak for the novel, my teacher was right about one thing: To Kill a Mockingbird should be required viewing…by everybody. Not just because of the masterful way it introduced themes of systematic racism to an unsuspecting audience 60 years ago, but the fact those same themes remain unfortunately relevant today…perhaps even more so.

Weighty messages notwithstanding, To Kill a Mockingbird is essential viewing because it remains a masterclass in storytelling. Charming, intelligent, heartfelt and harrowing, the film jerks our emotions around with stunning ease. Of course, the person we most associate with the film is the great Gregory Peck, and indeed, this is one of his best performances. However, director Robert Mulligan doesn’t get near the credit he deserves, nor does screenwriter Horton Foote. Successfully adapting any book for the screen is a daunting task, let alone one that’s regularly ranked among the greatest American novels ever written (though I wouldn’t know…I still haven’t read it).

Most importantly, To Kill a Mockingbird is simply grand entertainment that doesn’t feel dated in the least. It’s one of those films that you revisit from time to time and always find something new to appreciate that you didn’t before. For instance, it was during this viewing when I came to the conclusion that “Bob” Ewell (James Anderson) deserves mention among cinema’s most hateful movie villains.

To Kill a Mockingbird has previously been issued on Blu-ray numerous times with a pretty damn good transfer. This 60th Anniversary set features a 4K and Blu-ray disc, both of which have been remastered. The result is all-around better resolution and sharpness. Also included are hours worth of substantial bonus features. Most are from older editions, but this set does boast a brand new retrospective doc which doesn’t add much that hasn’t been always said or written, but is enjoyable anyway.