BRAHMASTRA: SHIVA PART 1: Ayan Mukerji’s Hindu Godbuster Will Have You Gasping for Air 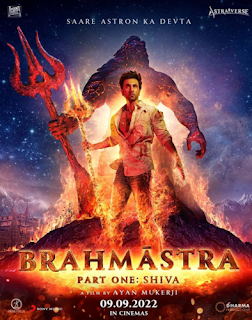 If billionaire, playboy, philanthropists, Kryptonite heirs and boys bitten by radioactive spiders can become superheroes and own their own franchise, then why can’t Hindu gods? That’s the question that this gigantically OTT, genuinely spectacular and really very silly Bollywood blockbuster attempts to answer with a giant Wizard-like staff and lots of Indian mythology. Its title refers to a series of Hindu guardians tasked with protecting the universe from evil, but is really yet another example of movie studios trying to cash in on the success of the MCU.

Does it work? Well, Brahmastra is just about the stupidest, most stupendous and most spectacular blockbuster of recent times. It doesn’t make sense in any of the conventional senses and features more melodrama than Nic Cage at his method acting worst. But it’s much better than I expected it to be, features some fine performances and some of the best special effects I’ve ever seen…In a Bollywood blockbuster.

Despite the pretensions and pompitude of Hindu mythos, Brahmastra has something for everyone. It’s got a bit of brains in the form of Ranbir Kapoor and indeed Shah Rukh Khan as a scientist (I know I don’t believe it either!). It’s got a beefy hunk for mum in our leading Hindu superhero Shiva whom meek, geeky Ranbir becomes when fulfilling his destiny. Hindu mythos and God action for the kids. And a barely legal aged girl for dad in Alia Bhatt who is a genuinely lovely presence throughout.

Are there flaws? Yes, about a billion. The action is non-stop and quite disorientating, giving KGF: Chapter 2 (2022) a run for incomprehensibility. I don’t doubt many will be put off and slightly offended at the concept of taking great Hindu gods like Shiva and turning them into superheroes. The movie has already caused controversy 'cos Kapoor ate beef. The plot is preposterous nonsense with less realism and every bit as much baloney as peroxide blonde American footballer Flash Gordon becoming savior of the universe.

Yet what makes this movie so terrible in Bolly skeptics’ eyes is precisely what makes it so brilliant to enthusiasts like me. For the masses and billions of India, cinema is a source of escapism and magical realism from the woes of poverty, casteism and communalism. For the poor, being transported to other worlds at the cinema is about the greatest escape they can get from barely having enough food on the table. For lower castes, it’s a dream of a better life where they are more accepted by society. For non-Hindus, it’s a paean to a more inclusive India that is so out of step with Modi’s increasingly divided and retrogressive country.

Brahmastra is bonkers, beautiful and brilliant all at the same time the way the best of Bollywood always is. It’s India’s shot at delivering a Game of Thrones, a Lord of the Rings or an Avengers Assemble. Of course, it doesn’t make a bit of sense and the idea of using Gods for superheroes is so stupid, but actually makes hell of a lot of sense given their superpowers and inhuman abilities. It’s dumb, but honestly kind of genius. I really wish us Brits had the backstory to build a franchise like this.

The first thing to say is that Ranbir Kapoor makes a great god of war and intergalactic superhero. I’ve always thought he had something of Andrew Garfield’s Peter Parker in The Amazing Spider-Man (2012) about him. He’s got that quivering bottom lip and those edgy eyebrows that are so perfect for playing a shy, sheepish social outcast. But he’s also so, so handsome when shedding the shyness and social awkwardness and transforming into a fully fledged superhero. No actor in the world other than Andrew Garfield does a geek-to-superhuman transformation quite as good as Ranbir. He’s the classic case of geek gone bad in the best kind of way.

Alia Bhatt’s role is a little more thankless in that she essentially fills the Gwen Stacy love interest part. She’s beautiful, though, and utterly lovely in person - a quite literal Meg Ryan-cum-Emma Stone manifestation of girl next door magic. I loved her chemistry with Ranbir. They are a cute couple to rival Peter and Gwen when played by Andrew Garfield and Emma Stone. I loved their chemistry and found Alia oh so fanciable in the best possible way.

It appears Brahmastra is perhaps the latest Bollywood blockbuster to be lacking on the feminist front. Alia Bhatt’s love interest is, in many ways, a damsel in distress waiting to be rescued from the hands of the bad guys by Ranbir’s Shiva. She doesn’t get the chance to kick ass like Gal Gadot’s Wonder Woman or Scarlett Johansson’s Black Widow. And no matter how lovely she is, her choice of attire is hardly the most empowering given she spends a good portion of Ranbir’s rather cute chaste flirtations in a rather short skirt.

But then you look at the pedigree of the main villain. I loved Mouni Ray’s performance as Junoon. She was absolutely brilliant and clearly channeled some of the dark crimson energy of Elizabeth Olesen as Dark Wanda in Dr. Strange in the Multiverse of Madness (2022) as the metaphorical demon of the East. Junoon is a horror character scarier than Wanda and I really felt Ray was channeling the most demonic elements of the Wicked Witch of the West from The Wizard of Oz (1939). It’s a truly horrifying performance and a great female supervillainess. She’s actually one of the most well-rounded female villains of all time - not sexualized like Harley Quinn in the 2016 Suicide Squad and the special effects are far better than those applied to Cheetah in ‘Wonder Woman 1984’ (2022). This is one of those blockbusters that isn’t content with having a female superhero, but wants a woman baddie too and good for it! Ray’s performance could have been pantomime boo-hiss camp, but it’s not, it’s really well-done and properly creepy in the best horror kind of way.

There are cameos from many of Bollywood’s biggest actors. Admittedly, I found Shah Rukh Khan as a scientist in spectacles a little cringey. But then, as much as it’s easy to laugh at Shah Rukh Khan, you can’t deny the man is the definition of Tom Cruise cool and a sex symbol worthy of Brad Pitt and, in this film, a thinking person’s Johnny Depp. I much preferred the performances of Amitabh Bachchan and Dimple Kapadia who are both national treasures and deliver two of their very best performances. See, Brahmastra is the surprisingly feminist beast. Not only does it have a male wise old mentor like Amitabh Bachchan, but a female mentor too in Dimple Kapadia.

There are some fantastic special effects. It really shows how much Indian technology has advanced as the country opens up to the rest of the world. You won’t find better CGI even in the biggest MCU blockbusters. The crimson red effects applied to Junoon were a real Raimi-esque creation that looked far more menacing and spectacular than anything in Multiverse of Madness and this movie is bloody crazier than anything in that not-“strange” enough Marvel movie.

I should hate Brahmastra. It’s big, it’s brash and boasts more melodrama than Douglas Sirk on a wet day. Everything is overblown in the measure and manner of James Cameron’s Titanic (1997) or Avatar (2009). But it’s also proof of the escapist magic of Bollywood cinema. Where a trip to the cinema can mean the matter between life and death for an Indian citizen who will love being transported to another world for the next 3 hours.

I hope this spawns a great franchise. Ranbir Kapoor is a fine superhero. There’s great action here, big romance and bit parts from India’s acting greats with a real passion for Indian mythology even as the plot extends to stretching incredulity. Go with it, though, and you’ll be gasping for air in the best possible way!