FALL is a Visceral Thrill Ride 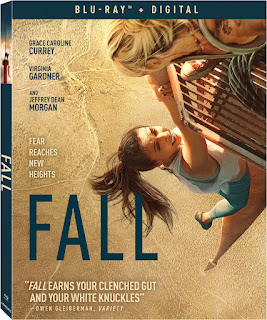 While I wouldn’t exactly say I’m afraid of heights, I certainly avoid precariously putting myself in places where falling any more than a few feet is a distinct possibility. That probably comes with age and an increasing awareness of my own mortality. I had no such trepidations as a teenager, when my buddy Karl and I decided to try climbing a 300-foot radio tower in the middle of the night, for no other reason than it seemed like a good idea (and we were drunk). That’s a far dumber motive than the two main characters in Fall have for doing the same thing.

We never actually accomplished our mission, however. Karl fearlessly elected to go first, but discovered the hard way that parts of the tower base were indeed electric. He made it up about 10 feet before getting his ass zapped back to Earth and laid unconscious for several minutes. Terrified, I briefly considered leaving his corpse behind and claiming ignorance of his whereabouts. Then he woke up, at which time we came to the mutual decision that solid ground was a damn fine place to be.

That same realization doesn’t occur to Becky (Grace Carolyn Currey) and Shiloh (Virginia Gardner) until after they climb to the top of an abandoned, 2,000-foot TV tower, then get stuck when the ladder breaks apart. Not only are they miles from the nearest town, they can’t get a phone signal at that elevation (I’m not sure if that’s how phone signals work, but I can accept it for the sake of the story). Fall’s dim first act establishes these friends’ reasons for such a stunt, which has Shiloh coercing Becky to face her fears and get on with life after the latter’s husband dies during a previous climb.

Being an obnoxious YouTuber who specializes in high-risk stunts, Shiloh might be considered the movie’s de facto antagonist, especially in-light of an unnecessary revelation at about halfway mark. And speaking of unnecessary…despite prominent billing, Jeffrey Dean Morgan (as Becky’s estranged dad) is largely gratuitous, his character existing to pad the story with manufactured drama.

But once the superfluous narrative baggage is set aside to focus on Becky & Shiloh’s predicament, Fall is a nerve-wracking, high-tension thrill-ride…maybe even a masterpiece. If “Best Picture to Physically Affect the Viewer” was an Oscar category, this film would be a shoo-in. While the special effects are occasionally wonky - the ravenous buzzards, in particular - we’re stuck 2,000 feet in the air right with these girls and feeling a queasy, relentless tingle in our crotches. The ride only grows more harrowing when food and water become an issue and they’re forced to resort to extreme measures just to stay alive.

Sure, Becky & Shiloh’s situation is entirely of their own making, but considering I was once ready to try the same thing for absolutely no legitimate reason, their dubious decision is somewhat relatable. The conclusion is a little anticlimactic, but throughout most of its running time, Fall works tremendously as pure sensation, a gripping visceral experience similar to a rollercoaster ride. Viewers even remotely afraid of heights may consider this the scariest horror film they’ve ever seen.