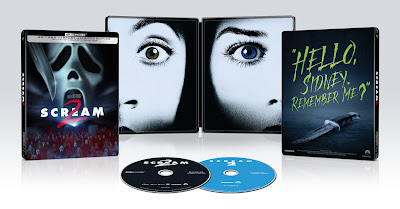 Considering the self-aware nature of the original Scream, one would assume that the novelty of its concept wouldn't have been conducive to a sequel, to say nothing of a long-running franchise. But not only is Scream 2 a worthy follow-up, it surpasses the original in some ways, largely because it’s a sequel.

What’s really surprising is that Scream 2 was produced and released less than a year after the first film. In the horror genre, such a quick turnaround is generally the sure sign of a cash grab. Horror fans - slasher fans, in particular - tend to be a conservative bunch who prefer their sequels to dish up more of the same, only bigger and bloodier.

Director Wes Craven and screenwriter Kevin Williamson appear well-aware of this, so while managing to meet audience expectations without completely succumbing to them, Scream 2’s meta aspects are largely related to the inevitability of horror sequels, even cynically acknowledging their overall inferiority and reluctance to stray from a tried-and-true formula.

By superficially sticking to its own formula with acute self-awareness, Scream 2 ironically ends up being one of the best horror sequels ever made. Though even this franchise would ultimately experience the law of diminishing returns, Scream 2 fully justifies its existence - and the return of all the first film’s surviving characters - with great writing, sharp direction and an opening sequence that’s as shocking as it is clever (providing what might be the ultimate commentary on both slasher films and their fans).

This 25th Anniversary SteelBook does not include any new supplemental material, but the overall picture and sound are a big improvement over the original Blu-ray release. The case itself also features impressive new artwork, so if aesthetics are your thing, it’s worth grabbing.