A Tale of TWO WITCHES 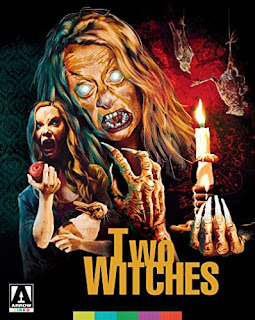 For his feature debut, director Pierre Tsigaridis is certainly confident. So confident, in fact, that in one of this disc’s interviews, he declares Two Witches the beginning of a potential franchise. Whether or not it warrants additional chapters is debatable, but even though the door is left wide open for a sequel, it works just fine as a stand-alone creepfest.

Two Witches is a horror film that’s brimming with similar confidence…in its concept, special effects, gruesomeness and assortment of oddball characters (the witchy antagonists, in particular). Additionally, the ample amounts of surrealism, ambiguity and repellent imagery suggest some inspiration from Italian horror of the ‘70s & ‘80s. But unlike the dead-serious tone of most of those films, this one throws in some amusing black comedy here and there.

The title tells all, since the film consists of two (mostly) separate stories. In the first, “The Boogeywoman,” Sarah (Belle Adams) is an expectant mother who fears she’s being stalked by a sinister old woman with supernatural abilities. Her douchebag boyfriend, Simon (Ian Michaels), repeatedly mansplains to her that she’s delusional. However, he thinks otherwise when, while they're visiting another couple, Sarah becomes catatonic and eventually possessed. He’s subjected to terrors that may be real or hallucinatory. Either way, this story comes to a disturbing open-ended conclusion.

In the second story, “Masha,” the titular character (Rebekah Kennedy) is an awkward, oversexed young woman who’s weirdly obsessed with her roommate, Rachel (Kristina Klebe). She also happens to be a witch, though Rachel doesn’t realize that until it’s too late. The couple from the first story - Dustin and Melissa (Tim Fox & Dina Silva) - amusingly appear in this one as well, providing a connecting thread between the two. And like “The Boogeywoman,” this one ends on a nasty note…

…but wait! There’s an epilogue, and a pretty long one, too. However, it’s mostly inconsequential and appears to serve as a promise of more to come.

For the most part, Two Witches is engaging enough to maintain interest. Despite the limited budget, Tsigaridis strings together some effective scenes, though occasionally seems to indulge in ambiguity for its own sake. While the performances are hit or miss, Kennedy is a ton of scenery-chewing fun as Masha. If this does indeed become a franchise, I hope they have the good sense to include her character.

SUPPLEMENTAL BOOKLET - (not available for review)

REVERSIBLE COVER - (not available for review)

MINI POSTER - (not available for review)