PAWS OF FURY: THE LEGEND OF HANK: The Surprising Remake 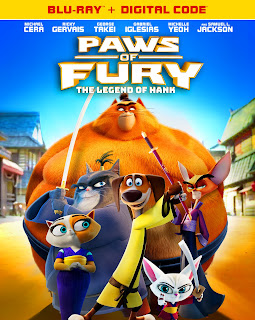 PAWS OF FURY: THE LEGEND OF HANK (Blu-ray Review)
2022 / 97 min
FROM PARAMOUNT
Review by Stinky the Destroyer😽

The theatrical trailer for Paws of Fury doesn’t do it justice. The version I saw made the film look like a cynical, generically-animated rip-off of Kung Fu Panda. Despite the impressive voice cast, the trailer assured me that this was one film I would never willingly endure without kids in-tow. Thank God my own were well-past the age when something like this would appeal to them.

However, Paws of Fury is not a rip-off of Kung Fu Panda or any other CG animated family film. Believe it or not, it is actually a remake. Not only that, it is a remake of the Mel Brooks classic, Blazing Saddles (it was even originally titled Blazing Samurai). Adapting one of the most notoriously un-PC movies of all time into a family film has certainly never been done before. At the very least, this wasn’t made with just undemanding kids in-mind.

While the racial aspects of Blazing Saddles are obviously not present, Paws of Fury tells the same basic story, only with cats and a dog, Hank (Michael Cena), who’s eager to become a samurai. However, dogs are forbidden in feudal Japan and he’s condemned to die. Meanwhile, Ika Chu (Ricky Gervais) wants to get rid Kakamucho, the peasant village standing in the way of completing his palace to appease the shogun, Toshi (Mel Brooks himself). So he appoints Hank as that village’s samurai, hoping the presence of a dog will drive everybody away.

But Paws of Fury doesn’t just rehash the same plot. It often incorporates Blazing Saddles’ dialogue, characters and key sequences…including the infamous fart scene. So even though the setting has changed, Blazing Saddles fans will immediately recognize feline versions of the Waco Kid, Mongo, Taggart, Hedley LaMarr and, of course, Governor La Petomane. And like that film, Paws of Fury frequently breaks the fourth wall, even acknowledging its own running time at one point.

Of course, this will be lost on kids, who’ll undoubtedly view Paws of Fury as just another cute cartoon and probably not as memorable as what Disney (or even Illumination) is cranking out, but fun in the moment. Conversely, their parents - or grandparents - will certainly find the amusing shout-outs to an adult classic worth checking out, even if the novelty likely wears off after one viewing.

FEATURETTES - “Cool Cats and One Hot Dog!”; “In the Drawing Room with director Ron Minkoff”; “Giving Voice to Paws of Fury: The Legend of Hank.”