THEY CRAWL BENEATH...and in the Garage 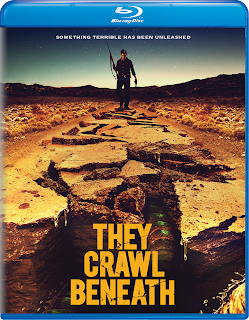 At the very least, They Crawl Beneath isn’t quite the Tremors rip-off it appears to be. In fact, the simplicity of the basic concept is kinda cool.

An earthquake unleashes a bunch of mutated, oversized and venomous nematodes. During the same quake, dedicated cop Danny (Joseph Almani) and his flaky uncle, Bill (Michael Para), become pinned under the car they were working on in the latter’s garage. Bill dies instantly, while Danny’s stuck, unable to free his legs. Since his phone dies, neither his fellow officers nor estranged girlfriend Gwen (Karlee Eldridge) are aware of his predicament.

Worse yet, some nematodes have found their way into the garage. Danny has to make-do with whatever is within reach to fight them off and try to escape from beneath the car. That-alone has the makings of a tight little thriller. And indeed, the parts where Danny squares off against these slimy little beasts is pretty fun. Considering an obviously limited budget, the film manages a good amount of claustrophobic tension with these scenes.

Elsewhere, however, the narrative is weighed down by unnecessary baggage, namely the subplots involving Danny's strained relationship with Gwen and, even worse, the revelations of Bill’s past (which have absolutely no bearing on the story or outcome). One gets the impression they were included to pad out the already brief running time. During the entire first act, the dialogue is almost embarrassingly clunky, exacerbated by pedestrian performances. Pare, in particular, is almost painful to watch.But They Crawl Beneath is ultimately saved when the narrative sheds all the peripheral noise to simply focus on Danny’s fight to survive (Almani’s performance even kicks it up a notch or two). The creatures themselves resemble the Dune’s giant sandworms, and while they aren’t always convincing, at least they aren’t rendered in CGI. I think most creature feature fans would prefer a bit of creative puppetry over something fired up on a laptop.