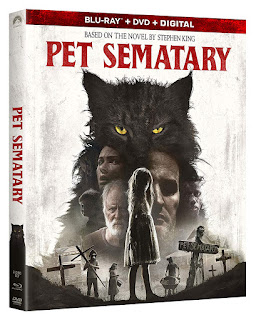 There’s nothing like remakes of childhood favorites to make one feel really old. I’m sure most of us have experienced that. Well, how ‘bout a remake of a film you vividly remember seeing in theaters as an adult? It hardly feels like the original Pet Sematary Just turned 30 and I’m forced to accept the hard fact that – in movie years – I’m ancient.

That sobering bit of personal reality notwithstanding, did Pet Sematary actually need to be remade? Probably not, but that’s been said about every movie near-and-dear to someone’s heart. While the 1989 film continues to be held in high regard in most horror circles (and with good reason), it isn’t a sacred cow on the level of Jaws or The Exorcist. Why not revisit the concept with fresh eyes?

Comparisons are inevitable, of course. And for horror fans, results may vary.

First and foremost, this ain’t your daddy’s Pet Sematary, which was more-or-less a faithful adaptation of Stephen King’s novel. This one uses the same basic premise, but takes significant story and character detours along the way, which is ultimately a good thing. Not that all the changes are an improvement, but the last thing anyone needs is another pointless scene-for-scene remake and even fans of the original movie or novel might be surprised how this one plays out.

Some King purists will cry foul, of course. Others might find themselves grudgingly admitting that this one more-effectively captures the oppressive, brooding tone of the novel. That doesn’t necessarily make it scarier – in fact, the film is seldom truly frightening – but it’s more atmospheric and a sense of impending doom hangs over the proceedings right from the get-go. The overall performances are better, as well, especially John Lithgow in the pivotal role of Jud Crandall. Lithgow’s more subtle (and slightly sinister) approach makes the character more dynamic than Fred Gwynne’s slack-jawed yokel from the original.

But comparatively speaking, it all comes down to personal preference. For another example, I found Church the Cat far more intimidating in this version. His matted, mangy appearance really makes it look like the little beast just came back from the dead, not-to-mention the way he stares, similar to how my own cat, Stinky, glares at me when she’s pissed.

While well crafted and atmospheric, I wouldn’t go as far as to say Pet Sematary is better than the 1989 film. The original went where most mainstream horror films feared to tread at the time, arguably rendering this one less disturbing or memorable. Still, the considerable story changes are intriguing enough to justify its existence.

EXTRA KIBBLES
"BEYOND THE DEADFALL” - An hour-long, four-part making-of documentary.
DELETED/EXTENDED SCENES
ALTERNATE ENDING – The film’s final ten minutes, with a somewhat different outcome. No better or worse than the one included in the final cut.
"NIGHT TERRORS” - A series of 1-2 minute nightmare sequences (not part of the film) featuring each of the Creed characters.
"THE TALE OF TIMMY BATERMAN” - Jud (John Lithgow) tells a more detailed story of a kid once buried in the burial ground. This might be considered a deleted scene, though it’s presented as more of a soliloquy.
DVD & DIGITAL COPIES
KITTY CONSENSUS: