THE CHILL FACTOR: There's No Business Like Snow Business 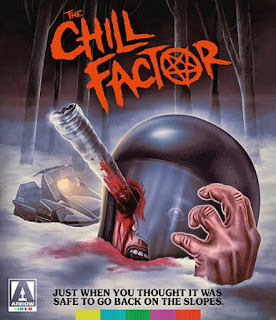 Hey, guys! We got all these snowmobiles for the weekend! Let’s make a movie!

Okay, so maybe it didn’t go down quite like that, but this silly slab of Wisconsin cheese is bookended by a couple of lengthy snowmobile chases which look like they gobbled-up a majority of the budget and shooting schedule.

I can sort-of relate. One weekend in college, a friend of mine managed to get-hold of a CPR dummy. While I was unsure I wanted to know what he was planning to do with it, his roommate, a would-be Spielberg with his parents’ video camera, suggested using the dummy to make an Evil Dead-like horror movie. His so-called “story” had one of us pretending to become possessed and explode. However, CPR dummies make terrible stunt doubles and are tougher to blow-up with a single M-80 than we thought. We ended up with seven minutes of video too stupid to show anybody. But in our defense, we were pretty shitfaced.

Director Christopher Webster probably wasn’t as shitfaced while making The Chill Factor, but based on the demonic possession story introduced to kill time between snowmobile battles, I’d wager he enjoyed Evil Dead as much as we did. The usual tropes are assembled: young folks stranded in the woods; an isolated old house; artifacts explaining the building’s dark past; the same young folks becoming possessed; a variety of violent deaths.

But there’s a reason Webster never directed another film and why none of his actors were ever heard from again. Not only is The Chill Factor derivative, it’s plodding and creatively vapid. Furthermore, its dead-serious tone is undone by laughable dialogue and jaw-droppingly terrible performances. There are a few decent make-up effects that turned out better than our exploding CPR dummy, but other than throwing snowmobiles into the mix, the whole thing looks like it was cynically cranked-out to get onto video shelves as fast as possible.

Speaking of which, if the plot synopsis rings a bell, readers of a certain age might recall seeing The Chill Factor under its original VHS title, Demon Possessed. Perhaps someone finally noticed the old title is not-only as generic as the film, it is grammatically incorrect. After all, hyphens exist for a reason.

At any rate, the film must have some kind of cult following for Arrow Video to bring it out of mothballs with a fresh coat of paint. This is another case where the plentiful bonus features are far more interesting than the movie itself, especially the interviews with assorted crew members who braved the mid-western winter back in ‘93 (where we learn The Chill Factor was part of a business decision to make three low-budget features in Wisconsin).

EXTRA KIBBLES
"LIGHTS! CAMERAS! SNOWMOBILES!” - Interview with Production Manager Alexandra Reed.
"PORTRAIT OF A MAKE-UP ARTIST” - Interview with FX artist Jeffrey Lyle Segal, whose bigger claim to fame were the make-up effects in Henry: Portrait of a Serial Killer. This might also make him the most famous guy attached to this film.
"FIRE AND ICE” - Interview with Stunt Coordinator Gary Paul (a snowmobiler, of course).
"OUIJA AND CHILL” - Interview with ass’t make-up artist Hank Carlson.
AUDIO COMMENTARY – By writer Josh Hadley and ass’t make-up artist Hank Carlson.
ORIGINAL VHS WORKPRINT
VHS TRAILER – Back when this was still known as Demon Possessed.
SUPPLEMENTAL BOOKLET – With cast/crew credits, images, restoration details and a wonderfully-snarky essay, “The Chill Factor: A Beautiful Disaster,” by Mike White.
REVERSIBLE COVER – Both of which make the film look better than it really is.

BLEH...LIKE COUGHING UP A HAIRBALL.
Posted by D.M. Anderson at 6:36 PM