DOMINO and the Shadow of De Palma 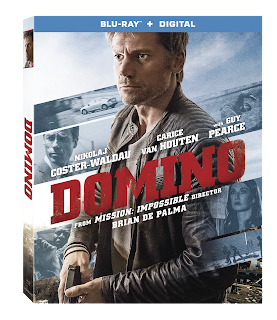 Once upon a time, Brian De Palma was an indelible brand name. Arguably the most polarizing director of the so-called “New Hollywood” (which included the likes of Scorsese, Coppola and Friedkin), his work was identified by glorious excess. Not just sex and violence – though there was often plenty of both – but a Hitchcock-influenced visual flair.

That Brian De Palma is long gone. In his place is a hired gun whose name still has some market value, but his heart doesn’t seem to be in it anymore.

That’s not to say Domino isn’t a decent film. It’s a watchable little thriller with Nikolaj Coster-Waldau as Christian Toft, a Danish cop trying to avenge his partner, murdered by suspected terrorist Ezra Tarzi (Eriq Ebouaney). However, Tarzi himself is forced by CIA agent Joe Martin (Guy Pearce) to hunt for a vicious ISIS leader, Wold, which is convenient since Tarzi wants the man dead, too. Meanwhile, Wold engineers a horrific attack at a film festival and plans another one during a bullfight in Spain. It becomes sort-of a race against time as Tarzi hunts for Wold while Toft hunts for Tarzi with the help of Alex (Carica van Houten), who was having an affair with Toft’s partner.

Domino is fairly well-paced with a story just interesting enough to keep our attention, punctuated by bursts of violent action (the mass shooting at the film festival is actually pretty disturbing). The performances are also uniformly decent, Pearce being a particular stand-out. But other than a knock-out rooftop chase that epitomizes classic De Palma, the film simply lacks the flamboyance and panache of his glory days. In short, it could have been directed by anybody.

So while Domino is definitely better than some of Brian De Palma’s recent films, it’s kind-of a shame it isn’t more memorable. Enjoyable enough in the moment, there’s nothing about it that sticks with the viewer for too long afterwards.