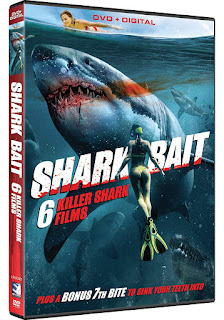 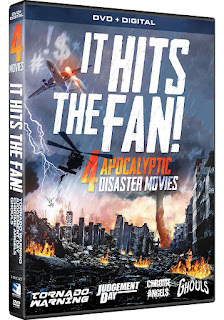 If you’re gonna assemble a batch of movies of decidedly questionable quality, you might as well do it with a sense of humor. As these two cheekily-titled collections demonstrate, Mill Creek Entertainment is well-aware of its potential audience...those who prefer their horror and action served with a big slice of cheese.

The accurately-titled SHARK BAIT gives us six silly flicks featuring everyone's favorite maneater, most helmed by the same director, Misty Talley. Typical of all SyFy killer creature fodder, the CGI is laughable, the plots blatantly ludicrous. Some of them are also a little too self-aware for their own good (a novelty that wore off after Sharknado 2). The one exception is Santa Jaws. Sure, it's a one-joke movie, but it happens to be a hell of a joke and the basic premise actually reflects some creative effort. Believe it or not, how this one incorporates Christmas-related traditions – from Santa hats to candy canes as weapons - is genuinely funny. This title alone makes the entire set worth picking up.

Elsewhere, Ghost Shark has some amusing kills, while Mississippi River Sharks is almost saved by Jason London’s self-mocking performance (at-least until he’s gobbled up). The remaining films scrape the bottom of the barrel in this dubious subgenre. Some even cannibalize scenes from each other to shave their budgets. Thrown-in for bad measure is Alligator Alley, once more-affectionately known as Ragin’ Cagin’ Redneck Gators. Like all the others, this was also shot in the Entertainment Capital of the World, rural Louisiana.

Speaking of which, we return to the Bayou State for IT HITS THE FAN. This collection’s subtitle, 4 Apocalyptic Disaster Movies, is a bit misleading. Only two of them, Tornado Warning and Judgement Day (the box cover’s spelling, not mine) loosely qualify as disaster movies and only the latter is watchable. It’s onscreen title is actually Quantum Apocalypse and the basic story – some kind of interstellar flux threatening to suck Earth into oblivion - ain’t half-bad. It’s one of those movies where the viewer can’t help but wonder how it would have turned out with a budget to match its ambition.

If one is in the right frame-of-mind, Chrome Angels is an awesomely awful Biker Chicks vs. Robots debacle. Best of all, it’s mostly played straight, meaning there’s unintentional hilarity in abundance. Leather-glad babes fearlessly strut, scowl and shoot people, while a seriously slumming Paul Le Mat slurs like he’s thoroughly hammered. Finally, Ghouls is a supernatural horror film and a colossal bore. Considering the number of disaster cheapies out there, the inclusion of this one is perplexing. In fact, IT HITS THE FAN doesn’t really deliver as advertised, and the only semi-decent flick (Quantum Apocalypse) isn't enough to make it worth the trouble.