THE BUSTER KEATON COLLECTION Volume 2: Another Batch of His Best 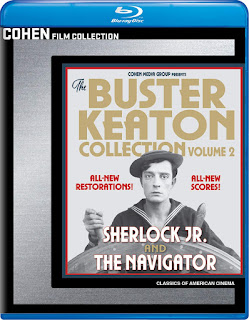 Cohen Media Group continues rolling-out their 4K restorations of Buster Keaton classics. Like Volume 1, which is one of the best Blu-rays of the year, Volume 2 presents two more films from the era that’s universally considered his creative peak.

In Sherlock Jr., Keaton plays a lowly theater projectionist with dreams of being a great detective. In a roundabout way, he gets his wish when he falls asleep on the job and projects himself into the film he’s showing. In this movie-within-a-movie - which mirrors the wraparound story – he’s Sherlock Jr., dapper detective brought in to solve the case of some missing pearls. Of course, being Keaton, he’s more bumbling buffoon than super sleuth. While the story is fitfully amusing, what makes Sherlock Jr. a true masterpiece is the editing, visual trickery and action sequences, all of which are pretty jawdropping for a 95 year old film.

Released the same year, The Navigator has Keaton playing Rollo Treadway, a wealthy young man trapped on-board an adrift ship along with Betsy (Kathryn McGuire), a snooty local girl he just proposed to (she said no, of course). Unaccustomed to fending for themselves, much of the humor comes from the two of them figuring out how to survive. Along the way, Keaton must deal with swordfish, a leaky ship and a tribe of cannibals. Though not as story-driven or technically impressive as Sherlock Jr., the episodic nature of The Navigator lends itself to some gags that are as funny as anything in Keaton’s filmography (the scene where he’s fleeing from a small cannon tied to his ankle is my personal favorite).

Both films have been given an impressive restoration, each with brand new music scores by Timothy Brock (Sherlock Jr.) and Robert Israel (The Navigator). As a matter of personal preference, this one isn’t quite as indispensable as Volume 1, if only because I consider The General to be Keaton’s crowning achievement. Still, these features are both great examples of a legend at the height of his comic powers, making The Buster Keaton Collection Volume 2 another fine addition to any classic film library.

MEE-OW! LIKE TAUNTING A MOUSE TO DEATH.
Posted by D.M. Anderson at 2:10 PM