BRONCO BILLY and a Career Transition 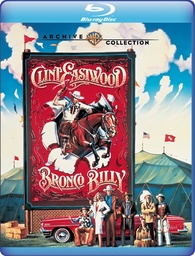 Review by Stinky, the Destroyer😽

For some of us raised on the Clint Eastwood of the ‘60s and ‘70s, Bronco Billy set off a few alarm bells. It was one thing to do a rare foray into comedy playing second banana to an orangutan - Every Which Way but Loose – because everybody needs a break from bounty hunting, infiltrating enemy lines or pissing-off his captain (and at least Clint still did plenty of talking with his fists). It’s quite another to strip away all the menace to play the most congenial character in the movie.

Not only that, Bronco Billy was the fourth straight movie where Eastwood didn’t kill anybody. What was next...a musical?? (This was before I learned he’d already traveled that path, too). Worse yet, he once again used his considerable clout to give his mousy girlfriend a prominent role. Let’s be honest here; if she hadn't hooked-up with Eastwood, the late Sondra Locke was destined for guest appearances on The Love Boat.

I’m making it sound as though I hated Bronco Billy, which isn’t true. I enjoyed it for what it was (but I think my date at the time liked it a lot more). As the down-on-his-luck star of a traveling Old West show, Eastwood is certainly more likable or down-to-Earth than he’d been before, actually displaying some real acting chops. The film’s tone is even more laid-back than Every Which Way but Loose and the silly, wafer-thin plot often takes a back-seat to the cavalcade of quirky characters (performed by numerous familiar faces from Eastwood’s inner circle). Ultimately, Bronco Billy was so light and fluffy that a strong gust blew most of it from my memory shortly afterwards.

But revisiting the film almost 40 years later – not giving it a single thought in the interim – I’m thinking Bronco Billy might be one of the most pivotal of Eastwood's career, especially as a director. A strong argument could be made that a character-driven film like this allowed him to transition to the more diverse work which garnered considerably more critical praise.

Can we thank this humble little flick for such everything that followed? That might be debatable, but while Clint Eastwood wasn’t quite ready to totally abandon big dumb action at the time, it was a definite indication he wanted to expand his horizons. Bronco Billy itself remains a mere footnote in Clint's filmography, but it’s affably entertaining in-the-moment and Eastwood completists will surely want to pick this up.