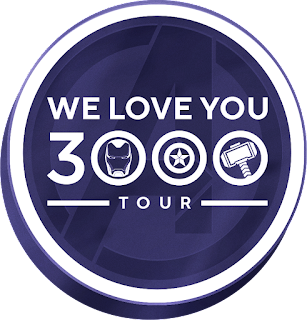 Marvel Studios Celebrates The In-Home Release of AVENGERS: ENDGAME with the "We Love You 3000" Tour.

In celebration of the in-home release of Avengers: Endgame, Marvel Studios and directors Anthony and Joe Russo have teamed up to launch the “We Love You 3000” Tour as a way to thank the fans who have invested so deeply in the Marvel Cinematic Universe (MCU), making it the single most successful franchise in film history. Special guests from Marvel Studios and the MCU will visit nine U.S. cities — beginning in San Diego at Comic-Con International on July 20 and ending in Anaheim at D23 Expo 2019 the weekend of Aug. 23-25— greeting and treating fans at each tour stop.  A total of 3,000 MCU Funko Pop Vinyl Figures will be distributed to fans throughout the tour as well as additional giveaways ranging from exclusive Avengers: Endgame prints to McDonald’s vouchers for a free Happy Meal plus an Avengers: Endgame Happy Meal toy to a MCU inspired sundaes and recipe cards courtesy of Ben & Jerry’s.

Best Buy will serve as the location for five “We Love You 3000” Tour stops, hosting in-store fan events to celebrate the nationwide release of Marvel Studios Avengers: Endgame on Blu-ray Aug. 13. Events will feature signings with Marvel Studios filmmakers and/or MCU talent; a special digital photo booth; specialty promotional giveaways, including MCU Funko Pop! Vinyl Figures and exclusive Avengers: Endgame prints; and much more.  Fans can also get their hands on the exclusive, limited edition "Avengers: Endgame” SteelBook and other collectable SteelBooks from the MCU at Best Buy stores across the country and on BestBuy.com. For more information on what’s taking place in each market, visit www.Marvel.com/WeLoveYou3000.

MA on Digital 8/20 and Blu-ray & DVD 9/3.
What starts out as a teenager’s dream turns into a terrifying nightmare in MA, the suspenseful thriller from Blumhouse, the producers of Get Out and Happy Death Day, arriving on Digital August 20, 2019 and on Blu-ray, DVD and On Demand September 3, 2019 from Universal Pictures Home Entertainment. Fans can now discover more than 20 minutes of thrilling bonus features not seen in theaters including a never-before-seen alternate ending, alternate and deleted scenes, and featurettes that take fans deeper into the unusual and unsettling world of MA. Starring Oscar winner Octavia Spencer (The Help, The Shape of Water), the stirring and suspense-filled horror film “makes you cringe in all the right places” (Owen Gleiberman, Variety) and is packed with unexpected twists and turns that will have viewers on the edge of their seat from start to finish. 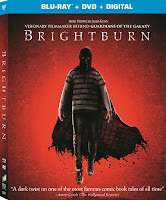 BRIGHTBURN on Digital 8/6 and 4K, Blu-ray & DVD 8/20.
What if a child from another world crash-landed on Earth, but instead of becoming a hero to mankind, he proved to be something far more sinister? With Brightburn, the visionary filmmaker of Guardians of the Galaxy and Slither presents a startling, subversive take on a radical new genre: superhero horror. This release is loaded with jaw-dropping bonus content including three vignettes, two featurettes, and filmmaker commentary. 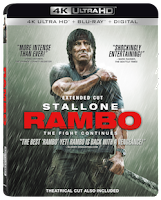 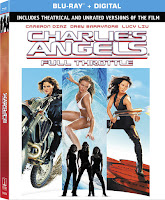 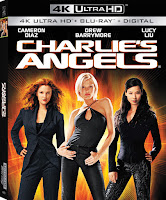 CHARLIE'S ANGELS On 4K ULTRA HD & CHARLIE'S ANGELS: FULL THROTTLE On Blu-Ray 10/22.
BOTH FILMS INCLUDE AN ALL-NEW SNEAK PEEK OF CHARLIE’S ANGELS (2019) AND HOURS OF FUN ARCHIVAL SPECIAL FEATURES.
CHARLIE’S ANGELS (2000) 4K Ultra - Cameron Diaz, Drew Barrymore and Lucy Liu star as the captivating crime-fighting trio who are masters of disguise, espionage and martial arts. When a devious mastermind embroils them in a plot to destroy individual privacy, the Angels, aided by their loyal sidekick Bosley (Bill Murray), set out to bring down the bad guys. But when a terrible secret is revealed, it makes the Angels targets for assassination. CHARLIE’S ANGELS: FULL THROTTLE Blu-ray - The "Angels", three investigative agents (Barrymore, Diaz and Liu) who work for the Charles Townsend Detective Agency, return for another high-octane series of adventures as they investigate the theft of a database of witness protection profiles, after five of the people on the list are murdered. They're aided by a new Bosley (Bernie Mac), in an adventure which pits them against a "fallen angel" (Moore), their old nemesis, the Thin Man (Glover), and others.
Posted by D.M. Anderson at 8:22 AM

TAP THE IMAGE TO ENTER